In a vote of 59% in favor and 41% opposed, the Rocky Mountain Conference (RMC) became the latest area of the Seventh-day Adventist Church to approve ordaining women pastors. The vote took place at the conference’s constituency session, held on August 21 at the LifeSource Adventist Fellowship in Denver, Colorado. The conference includes the states of Colorado, Wyoming, and part of New Mexico.

I cannot comprehend that heated dialogue has not moved the needle much since the 2010 ascendency of Elder Wilson. Much like trench warfare with empty pews signifying the casualties. The shell shocked survivors no longer able to participate in the battle. Sadly I can no longer fight in this battle.

I believe that in future years denominational historians will look closely to the actions that President Ted Wilson has taken on this issue. I suggest that such evaluation of his actions will lead to a conclusion that he has a responsibility for energizing those who favor the ordination of women to pastoral ministry. In short, I believe that we may be able in the future to give him some credit for the entry of women into the ordained SDA ministry.

i think the saying, “You Can’t Stop the Dawn”, which many have applied to WO, is so apt…things that are right do move the needle, despite obstacles that are put in its path…the core majority in the church eventually sense and feel it, and that’s that…

I feel like I have two conflicting thoughts, and I honestly don’t know why I’m even typing them. But anyway. First, I guess it would be pretty cool to have a map or even just list of places that have approved this. I’ve kind of lost track of which conferences and unions are doing it.

But second, what are we even doing here? Who are we honestly kidding? Like cdat said, empty pews are the real winners. The church is a shambling mound with one foot in the grave. Scroll back up and look at those photos. There’s one black-haired lady who looks kind of young, but she’s in a room of retirees.

Even at the local “progressive” church (now with drums!) I went to the one discussion group they had…one dude around 40 showed up, he was pretty cool. Everybody else was in their 60s or 70s.

And yeah, I know what someone’s dying to say, “we have this one young (writer or preacher or whatever)!” Please stop. You’ve got one, and I’ve got an entire freaking roomful of folks in their twilight years up there making decisions.

And also yeah, I know someone else is dying to point out that the “world church is younger.” I should hope so! The world church gets to do totally-SDA stuff like keep polygamy and ancestor worship because it’s “their culture.” Well, I’m an idiot hillbilly from the US South. For the next three months, the culture here will be college football on Saturdays and backyard BBQ. You think the churches here are going to allow any of that to “appeal to the youth?” Not in a million years. But sure, let’s keep giving everyone else the thumbs up to treat women like chattel and ignore the most basic of SDA beliefs.

Again, I don’t know what my point is. I just feel like we’re clapping about a new hubcap without stopping to realize it’s being put on a worn-out Oldsmobile rustbucket. I apologize for my frustration.

I think the maintenance of already existing polygamous families for new converts has to do with the pragmatic economics of such families coupled with a biblical precedent of God tolerating polygamy among the chosen even though He forbade it. Tearing a polygamous family apart can cause a lot of harm economically and otherwise. (It is my understanding that the church is not condoning the formation of new polygamous relationships, however, among the converted.)

Your reference to ancestor worship being tolerated is new to me. Could I ask you to elaborate on that please?

So I wonder what the GC will do next with the rebellious Rocky Mountain Conference? Will they ignore it, because it is too large a whale in offerings and tithes. Maybe they will see the light and realize that this is loosing issue. Maybe GC leaders will find a theological justification for ordaining women. They should not have to look very far–Ellen G. White may not have been ordained but she functioned as if she was ordained.

as the North Pacific Union Conference, Mid-America’s western neighbor, did not give delegates a chance to vote on ordination at its recent constituency session.

Apparently the NPU’s leadership is so afraid of addressing the question because they know that the Constituents may approve WO. Therefore, the only way to keep discriminating against women is to rule with an iron hand and a stubborn brain. I hope those people will soon fall from the pedestal, being replaced by others who understand and believe in freedom, dignity, and democracy.

Maybe they will see the light and realize that this is loosing issue.

i think this has already happened…there wasn’t any talk of compliance committees in this past GC session, from what i saw…

Yes, it will be interesting to see what (if anything) happens at this year’s Annual Council. As Spectrum has covered, the compliance committees were dropped without much fanfare in 2019. But the looming question is whether Wilson will reopen a compliance push now that the GC Session is done with. Whatever happens, you can be sure that we will be following it!

I think the maintenance of already existing polygamous families for new converts has to do with the pragmatic economics of such families coupled with a biblical precedent of God tolerating polygamy among the chosen even though He forbade it. Tearing a polygamous family apart can cause a lot of harm economically and otherwise. (It is my understanding that the church is not condoning the formation of new polygamous relationships, however, among the converted.)

When married Israelite brothers and their families lived together and one of the brothers died without fathering a son, the following verse seems to indicate that in this situation God was promoting, not forbidding, polygamy. (Or perhaps the requirement of providing a male heir was higher on God’s hierarchy of values than polygamous marriages.)

“If brothers are living together and one of them dies without a son, his widow must not marry outside the family. Her husband’s brother shall take her and marry her and fulfill the duty of a brother-in-law to her.” Duet. 25: 5

God did not merely tolerate polygamy. He encouraged, blessed, and codified polygamy for a war-torn nation that suffered from a dearth of males. It is important to understand that there are no ideals set forth in Scripture. Scripture in its entirety is historically conditioned. To attempt to divide Scripture between some illusory ideal and the historical context that shapes and informs Scripture’s historically conditioned moral teachings is hermeneutical error.

Yes, And it is obviously not wise to use scripture as the sole basis for making 21st century behavioral decisions and it is not always necessary to bend over backwards to justify a decision that is obviously correct and ethical despite scriptural precedent.

the church continues to decline in North America and Europe

Does that surprise you? I’m sure not surprised. If it was growing, then I’d be surprised.

I’m not surprised at all…but in 2015 nad pastors argued that they needed female pastors to minister in their areas/unions and it would help the church grow. And a full 8 years after we began ordaining women, (I’m in the Southern California conference) the church continues to decline here. I don’t think having women pastors was the solution to a dying church the advocates of WO said it was.

but in 2015 nad pastors argued that they needed female pastors to minister in their areas/unions and it would help the church grow.

i wonder if they really believed that, or if they were just saturating the field with unanswerable arguments in order to get their way…

but in terms of church growth, perhaps the real question is whether the rate of decline is steeper 8 yrs later, or whether it’s merely a continuation of the same negative slope…without strong growth under an all-male clergy, with a corresponding decline under an increasing female clergy, i don’t think any conclusive assessment can be made…

Your reference to ancestor worship being tolerated is new to me. Could I ask you to elaborate on that please?

Throw in genital mutilation, and witchcraft, for starters. We have a lot of 3rd world members who wouldn’t know “righteousness by faith” if they were standing in front of it.
Yet, they can vote against WO.

Fundamental to the issue of the role of women in SDA ministry is the fact that most SDAs of today have little understanding of the role that women had in the early days of our denominational life. The current issue of Adventist Today addresses this lack of knowledge. This lack of knowledge is considered to be so crucial that this issue has been made available to the public by simply requesting it at: 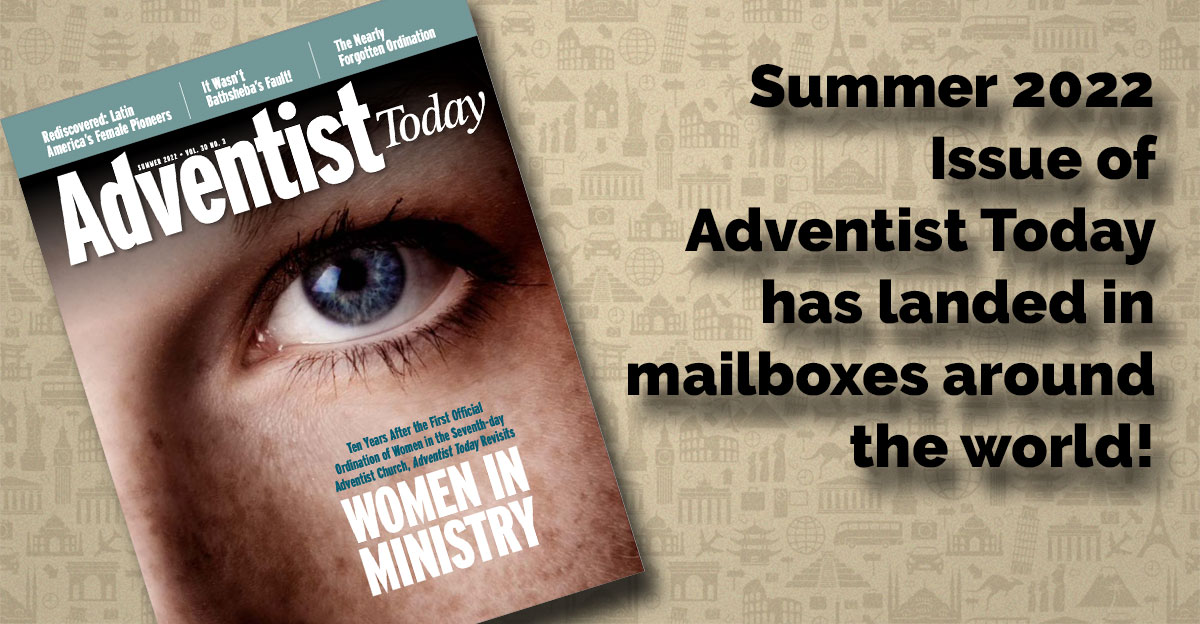 Get the Summer 2022 issue of Adventist Today!

25 August 2022  |   Writes AT reader Gregory Matthews, Kudos for the Summer print edition of Adventist Today, entitled “Women in Ministry.” I consider myself to be reasonably well informed as to th…

I consider that issue to be of great informative value to people on all sides of this issue.

So I wonder what the GC will do next with the rebellious Rocky Mountain Conference?

I hope there will be a response from the GC as the action of the Rocky Mountain conference cannot stay unadressed.

After all, if a conference decides not to submit to the decisions of the church at large what moral authority does it have to demand that a local church submit to its own decisions?

This kind of action can only weaken the church and its mission.