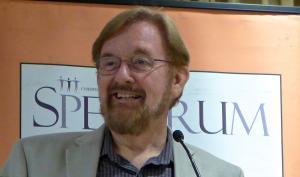 Roy Branson, founder of Spectrum, has passed away at the age of 77 in his home in Colton, California.

One of the first Seventh-day Adventist scholars to pursue graduate work in ethics, Roy Branson inspired and mentored a generation of students at the seminary at Andrews University. Immediately after receiving his Ph.D. in religious ethics from Harvard University in 1968, he returned to the Seminary where his creative teaching caught the imagination of many students who themselves earned doctorates and who now teach ethics in church institutions. Concerned about the isolation of Adventists pursing graduate studies at outside universities, Branson conceived of, and for over 20 years edited, Spectrum, the journal of the Association of Adventist Forums.

Advocating for social justice is a passion that has marked his life. As a graduate student, he marched with civil rights demonstrators across the Edmond Pettis Bridge in Selma, Alabama; later he created the first national interreligious coalition to fight multinational tobacco companies; more recently, he has supported justice within the church through his support for women’s ordination. During his ten years teaching at Columbia Union College (now Washington Adventist University), he started the Center for Law and Public Policy.

Most recently he was a professor of religion and Director of the Center for Christian Bioethics at Loma Linda University. The son of missionaries, Branson grew up in Beirut Lebanon. His Adventist pedigree includes a father E.L. Branson, who established Middle East College (now University) at its present site and a grandfather, W.H. Branson, who was president of the General Conference.

Roy Branson was a living embodiment of the Advent Hope, and that hope is the legacy he leaves behind.

Roy shattered so many of my prejudices. He was such a good and generous friend. This is heartbreaking. I hope–I intend–that his life will continue to inspire me for fresh thought and unbending honesty. Chuck

That’s a terrible loss for all of us. He left a great legacy with his writings and other accomplishments, though. Well done and Thank God!

I heard him speak at a bio-ethics conference around 1987 (I don’t remember alot, but he was good) and I guess 20 years later at Newbold College around 2007. He spoke then on varieties of Adventism. He had an amazing view which transcended the normal liberal-conservative categorization, and which made me see Adventism in a totally new light. That was his gift.

I wish that I had known him…but his was a life well-lived in service to others. His “intellectual” thumbprint still will live on through others he taught.

Roy embodied what it means to be a loyal Adventist who understood that loyalty to be most faithfully expressed in living as a citizen of the Kingdom Jesus announced and promised. I remember his first days at Andrews University and his discussion of the ethcal and theological significance of the concept of covenant. His ideas possessed depth and excitement. In one of our last exchanges, decades later, he asked me whether I thought “glory” held promise for theological work within our community of faith. I was too obtuse at that moment to recognize what I am sure was a reference to the imposing theological contribution of Hans Urs von Balthasar. “Yes, Roy. Most definitely yes.” I was his student in his youth and I am still his student with my own youth now gone.

My friend Roy is gone! I had hoped he would live forever. He was a great friend and cherished colleague. Don

The Sabbath School class Roy co-chaired at Sligo Church was the anchor that held us to the church.

Roy was a healthy irritation to the powers that were, mostly because he knew and understood so much more than they did. I hope this sad news is not an unhappy portend. Not enough Adventist scholars study outside the system, so he had few academic equals. Some. But few.

Roy was a wonderful friend and mentor. I am immensely grateful for the years I was able to spend working with him and will miss him tremendously. To borrow a title from an old issue of Spectrum, may Roy’s witness as a faithful dissenter with a brilliant intellect, unflagging sense of humor, and deep passion for his flawed but sometimes still beautiful community be the witness of a “once and future Adventism”. As unfashionable as it might be to say, I hope to see Roy again.

I am remembering the afternoon I discovered Spectrum magazine in the stacks at JN Andrews as a college freshman. Who knew these writers and ideas were right here on campus? In those pages the invisible was made manifest. Faith needs community and Roy made and tended one. With a twinkling eye and unrelenting challenge.

Wish I had heard of him before tonight. So he’s the guy who created WAU’s Center for Law and Public Policy. Wow RIP

In the May 1997 issue of Spectrum, Roy wrote the following editorial, which I quote in part:

"Because theologians can’t stop imagining new ways to express the vision that is Adventism. They spend years learning their Adventist Christian tradition… Deeply rooted in the tradition, theologians then feel compelled to make the Bible and the teachings of the church fresh, vital, and moving in the present…

"But some find that theologians make Adventism annoyingly complex. They expect religion and their church to bring to their distracted lives a reliable, reassuring order… They deeply resent theologians’ excitedly sharing diverse, innovative ways of expressing the traditional faith. They seek simple fundamentals. They demonstrate how fear creates fundamentalists…

“G. K. Chesterton once defended the long history of conflict – even warfare – carried out by Christians by saying, Of course they fight; they care so much. The future of the Adventist Church depends on its theologians not responding to what seems like an increasingly hostile environment by becoming more politically astute, muted, and gray. For succeeding generations to care about Adventism, its theologians must feel passionately enough to make us long for vistas we can barely glimpse. For a faith rising out of visionary experience to flourish, Adventism depends on its theologians to continue to be passionate and daring enough to inspire the church with sightings of new horizons.”

Roy titled this editorial “The Daring Vision That Is Adventism.” He lived every word of it. He cared so much – and he fought – because Adventism, we, depended on him, to dare and to vision.

Roy, in the Sabbath School classes he moderated at Sligo and of course through his editorship of Spectrum made Christianity an intellectually intreaguing and morally revolutionary force for me as I grew up. Much later, he would goad me into presenting topics at Loma Linda. I would agree mainly because if Roy Branson thought I could do a good job, maybe I could. That combination of provacatively challenging my assumptions while affirming me made as someone whose thoughts mattered helped me grow.

What would be Roy’s #1 contribution concept that improved the personal character/quality of life for his audience?

Is this a serious question amongst all of these wonderful comments?? Because if it is then you haven’t been reading anything…

made Christianity an intellectually intreaguing and morally revolutionary force for me as I grew up.

“The Daring Vision That Is Adventism.” He lived every word of it.

the guy who created WAU’s Center for Law and Public Policy.

Faith needs community and Roy made and tended one.

a wonderful friend and mentor.

He was a great friend

a loyal Adventist who understood that loyalty to be most faithfully expressed in living as a citizen of the Kingdom Jesus announced and promised.

He had an amazing view which transcended the normal liberal-conservative categorization, and which made me see Adventism in a totally new light. That was his gift.

Roy shattered so many of my prejudices.

He was such a good and generous friend.

Roy Branson appears to have been, first and foremost, a good friend. And one who cared deeply about his faith community and inspired many believers to bring Christian/Adventist principles into their contemporary sphere in a manner that challenged and acknowledged their intellect.

Wow! What a testimony. What a goldmine of epithets.

Roy never marched with the crowd. Even in Academy, he alone decided to journey to Manhattan to listen to an NBC orchestra rehearsal conducted by the legendary Arturo Toscanini in hopes of snagging a short interview–which he did! Raised almost as a single child who listened primarily to adult conversations while growing up in the Middle East, his mind and interests were far advanced for a teenager. In College, he imagined a journal for the church which would allow its most creative and thoughtful members to publish their passions–a dream that became reality years later via the Association of Adventist Forums.

He and I were–at times–competitors and collaborators–in our college classes. We worked together slavishly to prepare for Ottiie Stafford’s final examination in Shakespeare, and would not talk to each other the night before the final exam in Biblical Literature–again with OFS.

For years his office and mine in the Sligo Church Office Building were no more than twenty steps apart. My memory of our conversations and lunches together is a treasure I will carry as long as I live. He loved this church more than he could say and we knew it, even if his detractors saw him as the enemy.

An Adventist life well-lived, to be sure,

I sorrow at the passing of Roy. It was my privilege to know him in the late seventies and thereafter. In personal contacts with him I found him very outspoken regarding church decisions including those connected with Glacier View. He and Ray Cottrell were chiefly responsible for the issues of Spectrum which recorded the week at Glacier View which my wife, son, and I attended. I will always be grateful for those Spectrum issues as they preserve the facts of a historic week rather than mere opinions.

There are many living today who can thank God for the part Roy played in their lives. He was not only supremely intelligent but he had the courage of his convictions and a desire to aid the " underdog". May he have many successors.