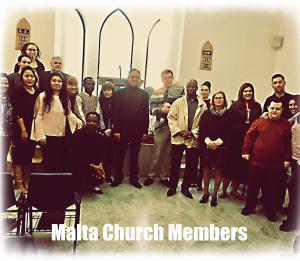 “Christianity has almost 2000 years of history in Malta. According to tradition, it was brought to the Islands by none other than the Apostle Paul himself around AD 60.

Paul was being taken to Rome to be tried as a political rebel, but the ship carrying him and some 274 others was caught in a violent storm only to be wrecked two weeks later on the Maltese coast. All aboard swam safely to land.”1

Today, Malta is mostly Roman Catholic although there is freedom of religion and conscience. It is a member of the European Union. It is a well-known tourist destination for those seeking sun, sandy beaches, and ancient history. Tourism increases the population of nearly half a million to at least three fold in the summertime. Malta is bilingual: Maltese is the national language and English the official language.2

Malta is under the Italian Union of Churches of the Seventh-day Adventist Church. There is only one Adventist church in the country. Sabbath attendance averages 50 individuals of various nationalities. Services are held in English.

The welcome I received on that first Sabbath of December 2017 was warm and friendly. Each visitor was asked to stand and say something about themselves. An Italian visiting pastor was scheduled to preach, in Italian, with English translation. However, after Sabbath School, he was more than happy for me to preach instead. The packed little church was attentive to the message.

Maltese born Lina, the church treasurer, told me she became an Adventist just by watching 3ABN! Another Maltese sister, whose young daughter had read the Mission story that morning, also shared God’s providences in how her family became Adventists.

Then there’s Bulgarian born Hristina whose story is truly inspiring. After a six-year marriage which left her a young widow at the age of 26, and another disastrous relationship which resulted in the birth of her son when her then boyfriend chose to abandon them, she tells how God led in her life all along. She too became an Adventist through a series of Divine providences. Today, her child-like and sincere faith in Him is as strong as it gets.

Hristina re-located to Malta from her country to look for work and start a new life, as a single mother with her young son. She started off cleaning houses. One day she fell six metres and ended up in hospital for two months, unable to move, with a broken back, broken ankles, and a broken wrist, not knowing if she would ever be able to walk or work again.

In her hospital bed she handed everything over to God, and has not looked back since. She tells me that people could not believe she survived that fall considering that a man had fallen from one floor previously and died.

The whole church, her family and friends, and the Italian Union, all rallied around and supported her with prayers, visits, and finances to help her through her ordeal. She had no insurance, and no savings, yet she was not on her own with so much practical love being showered on her.

She spent another two months convalescing, at the end of which she regained her mobility and was ready to go back to work. She was strongly advised to not return to her previous job and was given all the financial help she needed to train as a carer. At first she hesitated since her English was not up to scratch. She was finally persuaded to try anyhow, which she did, and succeeded.

She decided that she would never work on a Sabbath and prayed that she would find such a job. She said that God provided her with the right carer’s job, with Sabbaths off, looking after the elderly in a care home, a mere twenty minutes bus ride from her humble residence on the church premises where she is also the one and only church deaconess.

You will see her every Sabbath, on time, sitting on the front row eager to participate and receive the day’s blessings. She plays an active role in the kitchen for the fellowship meal.

Hristina is quite content living one day at a time in the assurance that since God took care of her in the past, He will continue to do so in the future.

With a serene smile she says, “I can’t wait for Jesus to come. I wish He would hurry up though!” Claude Lombart writes from the village of Binfield, UK, where he is in active retirement. He holds an emeritus pastoral credential from the BUC. Lombart has served in several countries in francophone West Africa, the Middle East, New Zealand, Scotland, and England in leadership, departmental, teaching, pastoral, and counsellor roles. He is a regular contributor to several church papers and has recently published a book on successful relationships.

Images courtesy of the author.

This is a companion discussion topic for the original entry at http://spectrummagazine.org/node/8455
2 Likes
petersomerset (Peter Marks) December 19, 2017, 9:17am #2

This is great, Claude! Thanks for sharing about real believers, their faith and their struggles. For once no theological revisionism or challenge to Adventist organisation.

It’s good to hear stories about real people in our church; we need more of these, and not just the ones with positive endings. One of the duties of a church family is to bear one another’s burdens through our doubts, fears, unanswered prayers, and also to love each other no matter where we are in our walks with Jesus. Examples: I know carers who faithfully work on Sabbath so their invalid patients may receive the attention and assistance they need. I know a librarian in a very small town who works the library on Sabbath and reads to the children, because there is no one else. Sometimes the decisions to do so are made with angst and trepidation - these folks have valuable stories about their relationships with God too, stories I’d love to hear.