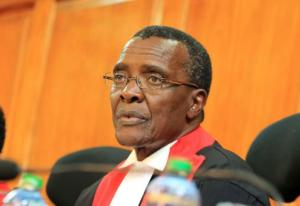 Seventh-day Adventist and Kenyan Supreme Court Chief Justice Gains Fame and Praise in Election Ruling. Kenya’s Supreme Court Chief Justice David Maraga, a Seventh-day Adventist who refuses to preside over a court case on a Saturday, has become a household name almost overnight. His court invalidated last month’s re-election of President Uhuru Kenyatta, saying the vote had been tainted by “irregularities and illegalities” and sending the country back to the polls. In Kenya, where courts have a long history of corruption and are often viewed as an extension of the government, the ruling was bold and stunning. It shocked even Kenyatta, who was so confident that the court would side with him that it was he who had urged his opponent Raila Odinga to resolve the dispute by legal means and not in the streets. Once accused of corruption, Judge Maraga went on live television and swore on the Bible that he had never taken a bribe.

Members of the Seventh-day Adventist Church showered praises on Chief Justice David Maraga over the Supreme Court ruling that annulled the August 8 presidential elections. Those interviewed by Sunday Standard hailed Maraga, who led a six-judge bench, saying his ruling was not informed just by his understanding of the law but also his religious convictions. “I am sure he (Maraga) slept peacefully last night bearing in mind that he made a judgement in accordance with what God had asked him and the law. I am a proud Adventist and happy to be associated with him,” said a worshiper.

Maraga and his wife Yucabeth Nyaboke attended a church service as usual at Nairobi Central SDA in Milimani. He did not address the congregation.

From The New York Times, “Kenyans Celebrate Court’s Ruling to Nullify Election” and from Standard Digital, “Seventh Day Adventists say they are happy to be associated with CJ David Maraga.”

Canadian Woman Unhappy to Receive Unsolicited Copy of The Great Controversy. Virginia Shemeliuk, a Canadian woman who lives outside Sandy Lake, is dismayed at having received a copy of Will America Survive? (previously titled The Great Controversy) in her mail. She drew parallels between the book and recent news events in the United States showing a country increasingly divided on race, politics, and culture. "This is kind of a firecracker snuck into the community," she said. Shemeliuk, a self-described "practising heathen," does not appreciate religion being shoved down her throat which she believes this book is trying to do. Shemeliuk lodged a formal complaint to Canada Post, but the postal organization explained there was little it could, or would, do. A member of the Seventh-day Adventist Church in the region, who did not want her name published, was aware of the mailout because she heard someone received the book but said local churches were not involved in its distribution. From The Brandon Sun, “Sandy Lake-area woman likens religious book to 'firecracker.'”

St. Thomas Seventh-day Adventist Churches Rally to End Violence Against Women and Children. Calling attention to one of the most pressing social issues facing the local community and world at large, members of the St. Thomas Seventh-day Adventist churches marched and rallied to end violence against women and children. More than 150 church members marched, including men, women and children of all ages. They filled Emancipation Gardens in support of the campaign, donning T-shirts, signs and pins that said "End It Now." Naomi Penn, area coordinator for the St. Thomas-St. John Seventh-day Adventists’ Women’s Ministries Council, said violence against women is more common in the community than most think. “Although it is an uncomfortable subject for many people, it has become more and more obvious that abuse is a serious problem,” Penn said. “We recognize that within our own community the extent of this problem and the serious, long-term effects it has upon the lives of all involved.” Citing statistics from the United Nations, Corliss Smithen, communications director for the Shiloh Seventh-day Adventist Church, said incidences of violence are on the rise around the world and it is the church’s duty to help stop this upward trend. From the St. Thomas Source, “Seventh-day Adventists Rally to End Violence Against Women.”

Guelph Adventist Church Reaffirms Forgiveness to Vandals at Sabbath Services.The community at large was invited to attend the Sabbath service at the Guelph Seventh-day Adventist Church in Ontario, Canada, which was vandalized by racist graffiti recently. Mayor Cam Guthrie, councillor Phil Allt, and Mike Schreiner, leader of the Ontario Green Party, and supportive community members were among those in attendance. Pastor Shelburn Fray says he is proud of how his congregation handled the defacing of the church's roof just over a week ago. "I am amazed; I am overwhelmed with the support the congregation has given to me and how they have taken it,” said Fray. His sermon at the church focused on love and inclusion. Fray told those in attendance the church’s doors are open—even to the perpetrator or perpetrators of the hateful graffiti. "We would look them in the eye and forgive them. In fact, we wouldn’t ask them 'why did you do this?' We don’t want to know why—it’s done. In my view, we want to move forward. How can we help you to prevent you from doing this to someone, somewhere else,” said Fray. From Sudbury, “Those who sprayed racist graffiti at Guelph church are welcome to walk in the door, says pastor.”

Adventist Pastor's Baby Born During Recent Total Solar Eclipse. SDA Pastor Keith Woodard and wife Cynthia had to deal with the unexpected when their baby was born a week early while they were traveling in Greenville, South Carolina. Baby Zachary was born on Monday–the same day as the total solar eclipse–at 3:38 a.m. at Greenville Memorial Hospital. Tuesday afternoon, Pastor Woodard said, "Well, what do you know. God always has the last laugh." The family had planned to leave before the solar eclipse, but the birth of their son, all 6 pounds 9 ounces and 20 inches, made it possible for them to take in the eclipse from a city in the direct path of the eclipse. "It was very special because my son was born on a historic day," Pastor Woodard said. From Fox Carolina, “Greenville, NC mother has baby week early while traveling in Greenville, SC during eclipse.”

World Harvest Outreach SDA Church in Houston Serves in Harvey Flood Relief Efforts. World Harvest Outreach Seventh-day Adventist Church in Houston, Texas, has been serving as a donation drop-off point for Houston residents who wish to donate to Hurricane Harvey survivors. Pastor Kenneth Goodman is the contact person for the church. Although city officials say financial donations are “preferred,” this and other drop-off points, including Bethel Heavenly Hands Church, have been established by the joint City/County Donations Management Plan as a way to help victims due to the catastrophic flooding and damage from the hurricane. From CW39, “City of Houston, Harris County designate donation drop-off locations.”

This is a companion discussion topic for the original entry at http://spectrummagazine.org/node/8218
tedrobertson1 (Ted Robertson) September 6, 2017, 9:32pm #2

I’m glad the complaint of one person receiving a free book in the mail could make international headlines. Silly me, all this time I’ve just thrown mail I don’t want into the trash. Who knew, great notoriety was just a quibble away?

Different countries have different rules on what is “Free Speech”…since she is from Canada this would be a far more serious complaint than in the US. You may find this article instructive:

Unlike Others, U.S. Defends Freedom to Offend in Speech

As more countries move to ban or restrict hate speech, some legal scholars say the U.S. should reconsider the broad scope of First Amendment protection.