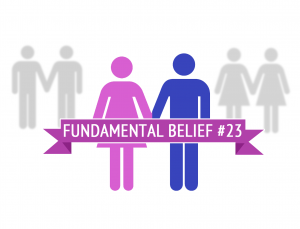 Only days after the United States Supreme Court issued its landmark decision in Obergefell v. Hodges, which extended the right to marry to same-sex couples in all fifty states, the Seventh-day Adventist Church will vote on proposed changes to Adventist Fundamental Belief #23, “Marriage and the Family.” While the high court’s ruling put the United States in the company of over twenty countries that grant marriage to same sex couples, delegates to the upcoming General Conference Session in San Antonio, Texas will consider language that will intentionally narrow the church’s definition of marriage to exclude same-sex couples.

The current wording of Fundamental Belief #23 defines marriage as "a lifelong union between a man and a woman." The belief also states,

For the Christian a marriage commitment is to God as well as to the spouse, and should be entered into only between partners who share a common faith.

Although some family relationships may fall short of the ideal, marriage partners who fully commit themselves to each other in Christ may achieve loving unity through the guidance of the Spirit and the nurture of the church.”

The editorial team responsible for proposing revisions to the Fundamental Beliefs has suggested replacing “partners” and “marriage partners” with “a man and a woman.” Marginal notes by the editorial team indicate a deliberate repudiation of same-sex relationships, saying:

The term ‘partners’ and the phrase ‘marriage partners’ could be misused by those promoting homosexuality. The revision removes any ambiguity.”

The suggested re-writes would also, for the first time, include the notion that the family of God “embraces both single and married persons.”

Delegates will have the chance to discuss all proposed changes before the revisions are put to a vote. The proposed changes are listed in their entirety below, along with editors' notes. Click the magnifying glass icon to enlarge.

The Church has every right to define its beliefs, It has no right to challenge civil law that does not infringe upon the Churches practice. Each citizen of age can vote his or her conscience. it is well that the church is as unambiguous on its beliefs as possible so recruitment is not obscured. It is well to recognize a civil union without conferring membership. it is not Christian to withhold fellowship. Remember Christ ate with open sinners. that includes us. Tom Z

Not quite as sure as Tom that “unambiguous” is the hallmark of church. Ambiguity is an expression of uncertainty - of not knowing all, of doubt, of seeing through a glass darkly. All too often the church wants to know it all and falls for the “ye shall be as gods, knowing good and evil”… Life is more complex. Making it less complex, less ambiguous, more clear cut is … limiting God’s unfathomable greatness.

It is well to recognize a civil union without conferring membership. it is not Christian to withhold fellowship.

With you on this one! Liked your distinction between membership and fellowship.
I believe the principle of freedom of religion assures that Churches can choose their beliefs and practices. People can accept the rules in one Church, of if they prefer/need they can always find a Church that accommodates their needs and the most diverse situations.

I’m glad the SDA church is being proactive and I am thankful that the SC voted 9-0 to protect everybody’s right to express their deeply rooted Biblical beliefs. My home church just voted to revoke the membership of a woman that recently married another woman. This is a church that made it clear that it isn’t ready to embrace homosexual “marriage”, but there plenty that are.

I am not a fan of tightening and restricting our creed. I wish we had a shorter list of rules. I wish there was a church that welcomes ALL and lets Jesus take care of what needs to change.

I’m saddened by this for several reasons:

To me, the implication of this sort of action is that they are not actually fundamental beliefs, but are the regularly changing and so are the opposite meaning may apply, that they are insignificant, unimportant.

I wrote as unambiguous as possible, meaning it is impossible to be explicitly clear for example what does the word recent mean in context of creation. How will that clarify a belief in creation by fiat? The Church affirms a God who is the same yesterday, today, and tomorrow. Also One Who is from everlasting to everlasting so where does one place creation of man in that setting? Recent adds no clarity to the belief in a Creator God. it just drives a stake in the ground in defiance of ageless ness. Tom Z

It seems somewhat obvious that this is a reaction to the recent SCOTUS finding.

To be fair, as far as I am aware the change in the wording was constructed earlier than the recent court decision. But still - the rewording certainly is connected to all those discussions that see the SDA endagered by LGBT people or the LGBT lobby … which is, I believe, a little absurd. The whole discussion conveniently sidetracks the real issues of the church.

To be fair, as far as I am aware the change in the wording was constructed earlier than the recent court decision.

I see your point. OK, then probably spurred by the changes in society that have led up to the ruling.

as unambiguous as possible

Thanks for pointing that out, Tom. It seems, I might have missed - at least in part - your point. Apologies. Still, to underline the point we (?) are making: Creation - definitely. But making it a test of Adventism that the “fiat” of the first day “let there be light” took exactly 24 hours of 60 minutes each to utter certainly is not a sign of strength or a strong faith in a creator God. As Galatians teaches us: we are children of God through faith in Jesus Christ, not assent to particular unambiguous (assumed) clarifications of doctrine.

My home church just voted to revoke the membership of a woman that recently married another woman. This is a church that made it clear that it isn’t ready to embrace homosexual “marriage”, but there plenty that are.

You finally did it then.

Hope the women and their family and friends involved took it ok.

Shame you had to lose such a talent.

Just as a matter of interest, what outcomes are you hoping to gain from this action?

I see that in San Antonio will be very much about rules and nothing about grace and justice.
Quo vadis Ecclesia mea?

San Antonio will be very much about rules and nothing about grace and justice.

I am glad you noticed and pointed out the fact. Perhaps GC sessions always tend to be that way a little bit. But at this particular session there is a certain pattern. You might win a battle - and yet lose the war… there are so many issues that should cause concern.

My home church just voted to revoke the membership of a woman that recently married another woman.

Unfortunate the church did that.

This is a church that made it clear that it isn’t ready to embrace homosexual “marriage”, but there plenty that are.

I can see that you, and your church don’t accept this newly married couple. But please don’t put their marriage in quotes. Their marriage is just as valid as yours or anyone else’s. What matters is their commitment and respect for the marital relationship and to each other.

But if what I believe is the clear teaching of the Bible, a secular marriage between homosexuals is an affront to God. A counterfeit to pure marriage, a viewpoint which the SDA church is upholding. This is not an act to redefine marriage as the title to this article boldly suggests. It is simply maintaining centuries-old status quo.

It’s actually unfortunate that this person forced the church into that. She acted in a way that has brought a lot of division and unrest to a lot of members. Are you faulting the organization for upholding it’s own standards that she agreed to upon receiving membership???

A few years ago, the head deacon had an adulterous affair and he lost his membership as well. Is it unfortunate that the church “did that” to him???

When you purchase a fishing license, by doing so, you agree to the codes written in the law book. So if you keep 7 trout and the law says the daily limit is 1, is the warden “doing it” to you when you get fined and lose your license? (And lose your trout).

Question
The changes in wording from “partners” to “Man and Woman”.
If this is passed, what will happen to those Local Congregations that have Accepted “partners” as members in good and regular standing?
What WILL HAPPEN to those Seventh day Adventist employed pastors who ALLOW “partners” as members AFTER this new wording is passed?
Will they have to disfellowship their “partnered” members?
What IF they still desire to conduct their church under the Old Rules, and continue to allow new “partners” to become full fledged members of their Seventh day Adventist church?
IS THIS a Local Option in spite of the New Rules?

I have taken a number of non-SDA G’s to Kinship weekends. Actually they were also non-churched. So was introducing them to SDAs and SDA stuff. One is a handicap Jewish friend. This will be the 5th time to take him. He was asking about going again a couple of months ago.[He lights the Sabbath candles on Friday evening, and says the Sabbath blessing prayer.]

Over time I have met several GLs that were baptized in the ocean at the Kinship. One couple attending in a small church were welcomed into the Membership of a much larger church 2 states away and by the Pastor who baptized them in the ocean. There are also “partnered” persons as members in good and regular standing in some Calif local church congregations.

What I would like to know is, What will be the Volcanic Eruption that will occur when this New Wording is voted in?
THANKS.
Steve.

Perhaps there should be a caveat on the baptismal certificate like there is on many corporate statements: “Rules subject to change.”

With a credit card, if you continue to use the card, it signifies you agree to the new terms. Maybe continuing to participate in the church makes a similar statement regarding any changes.