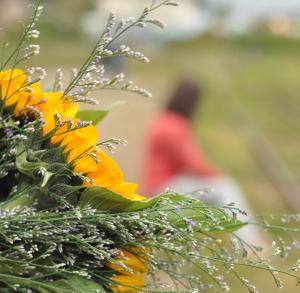 “Then great multitudes came to Him, having with them the lame, blind, mute, maimed, and many others; and they laid them down at Jesus' feet, and He healed them. So the multitude marveled when they saw the mute speaking, the maimed made whole, the lame walking, and the blind seeing; and they glorified the God of Israel.” —Matthew 15:30, 31

She lived with my grandparents as a foster child, but living with people who were not her parents was the least of her problems. She had cerebral palsy and was also blind. My grandparents, Harry and Elise Cooper, ran the National Transcribing Society for the Blind and cared for many blind children over the years as they moved from Mountain View, California to Camelback, Arizona to Redlands and Loma Linda, California.

I first met Sharron when she was seven years old. She was able to answer simple questions and would sing “Jesus loves me, this I know...” with fair intonation and clarity of voice. She was able to feed herself with a spoon and even walk around the house without help. For the next five or six years when I went to my grandparents' house, Sharron's condition did not change very much.

However, as Sharron became an adolescent, her physical and mental condition started to deteriorate. She became combative over simple activities such as helping to feed her or getting dressed. As Sharron approached 20 years of age, she no longer sang or could answer questions. Eventually Sharron became so violent that she had to be put into an institution. It was impossible for my aging grandparents to care for her, even though they loved her very much.

Having been around children with disabilities, I have often wondered about the relationship between cognition (that which a person understands), conversion, and accountability in God's plan of salvation. Do I believe that Sharron will be in heaven? Yes — a resounding yes! Do I have a specific Bible promise that says people with little or no cognition will be in heaven? Well, I do have God's concern for how the blind, lame, and orphans should be treated (Leviticus 19:14, Deuteronomy 27:18, Psalm 146:8, Jeremiah 31:8). I also have a Bible full of stories that demonstrate God's love, patience, and mercy, giving me the confidence that He will do whatever is necessary to bring home everyone He possibly can. The cross demonstrates His commitment to that!

It is my belief that those with mental disabilities have a special place in the heart of God. We know that the Seal of God is placed on the forehead of the redeemed because they understand the character of God and have chosen to stand for Him. However, Satan has attacked humanity by curtailing and removing the ability to understand these things, thereby defacing the image of God. We can have confidence that the God who notices a dead sparrow, also sees “the Sharrons of the world,” and that He will save all that are possible to save!

Please pray for and help those among us that need special help and attention, that we would defend them at all times and support their parents, guardians, and caregivers.

Dennis Hollingsead works in the Office of Development at Andrews University. A shorter version of this article first appeared in the Pioneer Memorial Church bulletin on March 9, 2013. It has been revised for Spectrum and is reprinted here with permission.

Photo by viet vang on Unsplash

This is a companion discussion topic for the original entry at http://spectrummagazine.org/node/8896
ezbord (ROBIN VANDERMOLEN) July 27, 2018, 6:54pm #2

It is excruciatingly heart rending to observe physically handicapped children.

Particularly when they are cognitively aware of their handicaps and are subjected to bullying/banning/shunning by their peer groups.

How do the Angels (and God) tolerate the millions of innocents so afflicted, and why is not the universe clamoring for God to fast forward the Second Coming to end such miseries?

But equally impacted, are the parents/grandparents/siblings of these handicapped unfortunates. The caregiving is monstrously difficult and all consuming.

My splendid congregation, twenty five years ago, created this statement proclaimed in each weekly worship bulletin and on their web site:

Our congregation offers FULL PARTICIPATION to all races, classes, ages, gender identities and sexual orientations in the life of our church.

Recently they added:
we offer full participation to all ABILITIES.
.
This added outreach was meant to include all handicapped children/teenagers/adults—people like Sharron—-to participate in the full life of the church.

Needless to say, this loving/compassionate/caring/inclusive congregation is not an Adventist one.

Most SDA congregations are too consumed in the shaming/shunning/discriminating/deriding those attendees who do not conform to their ideal of what a perfect Adventist should be.

For several decades I have become aware that I have entertained this belief system as
mine.
I just did not articulate it on paper.
“Spirituality is becoming conscious of [and intentional] about our relationship to God.
I firmly maintain that we are ALL already in a relationship with God and we have been
so since our very beginning [i.e. Adam and Eve], whether we know it or not, believe it
or not.
Spirituality is about becoming conscious of that relationship.”
— “Days of Awe and Wonder”, Marcus Borg, p. 124.

the singing of “Jesus loves me” was a sign of consciousness. God understood. Perhaps
that was still imbeded in her thoughts later in life, but unable to articulate later on.

I have seen “awakening” over the past several years as I have taken vehicle-less friends
to AA and NA meetings and their week-end conventions. Hundreds, and Thousands.
AA and NA are the Largest Denominations of God-Lovers, that God has here on earth.

I spent 20 years working with Developmentally Disabled individuals (many of whom with mental health issues) in all age groups for 20 years. The one thing that still stands out the most to me is the joie de vivre that most of them had. It was a constant reminder that one could be happy with the simple things in life and to live in the moment.

How society or the church cares for it’s most vulnerable citizens is a sign of how they value them. I don’t think that the D.D. individuals or their family/guardians have gotten the care, attention, support that they have always needed in Adventist Churches. If we claim to be Christians we need to exhibit to the rest of the world that they are important as human beings and be more inclusive.

Thank you Robin for your thoughts. Periodically interfacing with the blind in my grandparents home, made me realize and appreciate the health that God had given me, given me experience in how to talk with them (just talk with them as a normal person), and has helped me to always greet in church those with disabilities, trying to make them comfortable in my church. I am only one, but writing this article in my church my church bulletin was a catharsis for me as well as a call to action for others within my congregation. Let us help to make a change one individual–one church at a time!

It is my belief that those with mental disabilities have a special place in the heart of God. We know that the Seal of God is placed on the forehead of the redeemed because they understand the character of God and have chosen to stand for Him. However, Satan has attacked humanity by curtailing and removing the ability to understand these things, thereby defacing the image of God. We can have confidence that the God who notices a dead sparrow, also sees “the Sharrons of the world,” and that He will save all that are possible to save!

SDA theology is itself a victim of satanic attack having been curtailed and made crippled in understanding the true import of the gospel. i.e. the GOOD NEWS OF SALVATION. It places undue emphasis on cognition, knowledge, the will, willingness to keep the law and perfection. And so it engenders apprehension even among the able. How much more about the mentally challenged!

Nevertheless, when Jesus saw parents being prevented from bringing their children to him, he immediately stepped in. “Let the little children come to Me,” he said, “and do not forbid them; for of such is the kingdom of heaven.” Mat. 19:14. Interestingly, even though the parents were the ones coming to him, he never said that the kingdom of God was of them (righteous and willing and deliberate and perfect though their actions), but that it was of their children. (Jonah 4:10-11)

In essence then, a simple faith will do. Wasn’t that the testimony of Paul? “O wretched man that I am!” He lamented. “Who will deliver me from this body of death?” And then he rejoiced, exclaiming, “I thank God — through Jesus Christ our Lord!” Rom. 7:24-25

When I read the story I felt sorry to Sharron how can we justify her position or feeling towards God but I remember the story about Helen Keller, blind, mute and deaf but yet how beautiful those songs that she wrote. Praise God nothing is impossible with Him.