Today, the Southeastern California Conference of Seventh-day Adventists, with a membership of about 68,000, in an area comprising Imperial, Orange, Riverside, San Bernardino, and San Diego counties, released the following statement.

Members of the Southeastern California Conference Executive Committee voted on March 25 to adopt a document affirming the important, positive role of women in ministry. They took this action in response to a sermon preached by Doug Batchelor on February 6, 2010, at the Sacramento Central Seventh-day Adventist church in California.

Written in a spirit of Christian dialogue, the statement has been sent to Pastor Batchelor. A copy is posted here in the hope that it will be instructive and helpful for those considering the important issue of women in ministry.

This just shows who really is in “rebellion” to the church.

from Manuscript of January 17, 1901, Ellen White defines ministers as both male and female. 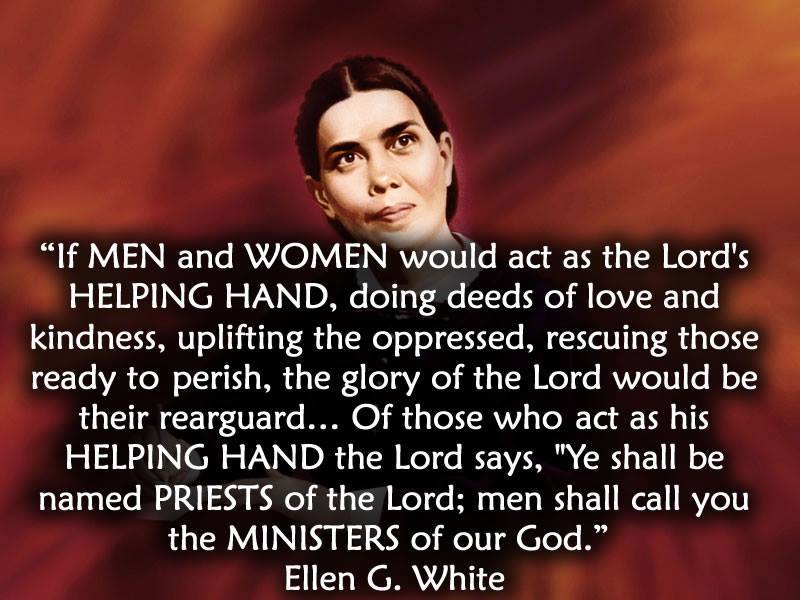 I truly wonder where Brother Batchelor gets his information on feminists and how he can speak for them himself. Nonetheless, I doubt that he personally knows any feminists.

“The gospel is not properly represented by those who have ceased to be students, who have, as it were, graduated in Bible study.” - EGW, AR&SH, April 6, 1886

He has no problem asserting things that we has no clue about. This is the reality for much of his theology. He gets the notions from his own human bias it appears.

It would appear that he can say anything that he wants and is fairly immune to most of the world outside of his small religious circle.

Very true. I wish someone would hold him accountable.

Very true. I wish someone would hold him accountable

But this is exactly their strategy, having an independent ministry so that nobody can touch their craziness. They even take money from people, but the Church have no jurisdiction on how the money is spent.

Therefore, they run a very convenient scheme, in which they are accountable to nobody and can preach their own doctrines and views while projecting a false image to the public pretending they are part of the Adventist group. They are actually a separate mini-sect sponsored by both Adventist people and the Adventist denomination as well.

I truly wonder where Brother Batchelor gets his information on feminists

Perhaps it is a response to his own mother, who reportedly was an early feminist. Perhaps his reaction to feminism is more personal and cultural and NOT theological.

Good point- I have heard this before about this mother. Given some of what we know about the family I am sure that Brother Batchelor has his own set of issues about different topics (feminism is just one of many).

They are actually a separate mini-sect sponsored by both Adventist people and the Adventist denomination as well.

Some Adventist are looking for the “party” that best represents their own particular beliefs…there’s a whole slew of different Adventist groups that one can support. It seems to me that by the very nature of Adventism that there is a never ending quest for “perfection”. Batchelor is just one of many whose “message” appeals to a certain subset type of Adventist (anti-gay, WO, etc.)

So, the solution is to discipline him under the terms of is pastoral appointment. His priority must be this appointment or else there is conflict of interest. It is untenable.

I truly wonder where Brother Batchelor gets his information on feminists

Repression of these primitive desires is possible with acquisition of a strong and strict superego. But it is also common knowledge that the superego can be weakened by medical conditions and psychological stress especially when “the self” is perceived to be threatened and attacked. And there is nothing more threatening to the literal fundamentalists than WO.

The interesting question then is why is nothing more threatening? Why are women so threatening to these old white males? Why does it matter to them if God calls a women to lead? Why threatens them if those moved to recognize a women with a human construct (as ordination is) do so? The potential realistic answers are horrifying.

Why are women so threatening to these old white males?

Shall I go on?

why is nothing more threatening?

It takes an extremely self-confident person to go face-to-face with a “colleague and peer.” Particularly if the only validating profession you have is determining who ought to be saved or not.

Shall I go on?

1- Women will “move in” and take their places, making the job market much tighter for them and their sons.

We’re talking about the job marked for pastors, right? I think we’re safe.

2- The line between gender will become fuzzy and cause confusion.

Yea, you know my mom worked my whole childhood, managed the public health department in my county, was on the school board, and was a deacon. Somehow I never confused her for a man. Perhaps I’m extra perceptive.

3- It will open the door wide to provide equal access to gays (and who knows who else?) to Adventist pulpits

That would be so cool.

4- Women in the congregation will get “ideas,” and cease submitting.

5- Women pastors will dress like men with shirts and ties.

Any why would they do that? And why would you frekin’ care? My pastor tries to avoid it whenever possible.

6- Men were just made and created to be the leaders. Period.

What a crock. Most people, men and women, are followers.

7- Women are scary. They have mood swings so can’t be trusted to act logically.

An this is an issue because our current set of pastors is so very logical? I have mood swings too and right now my mood is that the people that oppose WO are really irritating me since they have no platform at all to stand on except they’re literally good-old-boys that just don’t want change. Which isn’t a reason.

Yea, probably would cause a nuclear holocaust and the end of the world as we know it.

9- Women would move right out of their kitchens and men might have to help more around the house.

Uh huh. And if you think that is bad you’re a moron.

10 - It demeans a man to have to report to a woman. Especially if he believes he should have gotten the job in the first place.

I don’t know what bubble you’re living in if this is your objection. Those in the real world report to women all the time. You do this in the case where she is the boss. It’s really not that complicated or much of a concern for, well, normal people.

11- Women, girls, and teens will become independent and not “need” men.

12- An updated version of the Bible will have to be accepted with gender appropriate language and the hymnal might even need adaption.

Oh, not the hymnal! It can never change. See #8 for the end of the world scenario.