Stay or Split?: A Review of The Mountain Between Us 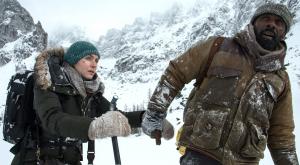 The Mountain Between Us (2017), a $35-million film releasing this weekend, pits humans against nature—both externally and internally—to probe the meaning of faithfulness. The acting and cinematography push this simple story beyond woman-going-to-her-wedding meets mysteriously-married-man. When things turn existentially dire, the questions pivot around survival and provoke reflection on the future of humanity. In fact, this novel turned film prompts some allegorically-layered wildness: imagine the hero of The Pilgrim’s Progress (1678) or the duo in book one of Spenser’s Faerie Queene (1590) climbing up Abraham Maslow’s hierarchy of needs to save us from our growing flirtations with apocalypse—natural and manmade. Perhaps that seems like a stretch to get all this from characters played by Kate Winslet and Idris Elba—but the Palestinian filmmaker, Hany Abu-Assad, seems to invite, and definitely echo, the epic.

The plot, very simply, centers on two people, a male surgeon and a female photojournalist, who survive the crash of a tiny plane and face a series of existential questions that posit their individual survival against the help or harm of the other. Underlying that humanistic question of faithfulness as preservative or hinderance lies a little twist on the classic Hollywood tension between their intimate time together vis-a-vis their already existing romantic commitments.

What’s obviously epic about the film is the cinematography. The four-plus minute uncut crash scene is brilliant. And if you long for winter landscapes or love looking at mountains, this movie might feed your soul. Harsh, pristine, elevated sweeping vistas provide a sense of remote, yet strangely intimate space. It reminded me of how the landscape in great Western genre films by John Ford or George Stevens becomes a character—affecting the humans wordlessly and sometimes most powerfully. Speaking of great filmmaker techniques, Hany Abu-Assad remixes the style of Sergio Leone by zooming into his characters’ faces for extreme close-ups. Over and over I found myself staring only at noses and wrinkled brows that rivaled the depth of the land outside the frame. I can still see a 20-foot-wide Elba eye, as big as a glacial lake—twitching for seconds with psychological tension–good, bad, and ugly. Beautiful.

The (PG-13) film is based on the breezy Charles Martin book by the same name. Lots of details are changed and the point-of-view is shifted from the novel’s first person to an objective third person directed by a camera which exposes each character’s truth and lies. The book gets psychologically deeper thanks to its perspective and voice, but the film covers that ground successfully through the subtle skill of the actors. All this raises questions about human faithfulness and what emerges when we test it.

At its core, the story reframes that classic sociological test—the prisoner’s dilemma. Should we cooperate for a chance at greater good or settle for an individual self-preservation that guarantees us all much less?

Of course the film doesn’t explicitly raise another social question, but like some interpreters of the Adam meets Eve story drawn to allegory, I found myself thinking about the openness of the human soul and even the progress of this collective body of earthlings. How do communities of faith...fulness survive? Should we stick together or split up to reach our goals? What is the mountain between us all?

Alexander Carpenter is a board member of Adventist Forum, the organization that publishes Spectrum.

This is a companion discussion topic for the original entry at http://spectrummagazine.org/node/8285
1 Like
JamesPeterson (James Peterson) October 6, 2017, 7:45pm #2

How do communities of faith…fulness survive? Should [they] stick together or split up to reach [their own] goals? What is the mountain between [them]?

That is a good question, especially relevant to SDA as they grapple now with what many perceive as fundamental to their faith. However, SDA have always maintained a selfish posture, much like the JW and LDS. Common ground is not something they seek, being wary as they are of THEOLOGICAL SIN.

For SDA, JW and LDS, sin is more than moral failing. It encompasses failure to subscribe to and assert doctrinal tenets as well. For them, allowing for women’s ordination (for example) is a clear indication that “Babylon has fallen, has fallen! Come out of her, my people!” Even in spite of the looming threat of Islam, or atheism, or even agnosticism, nothing is more abhorrent to them than to sit at a world council of denominations and decide how best to handle the crisis (or opportunity) together as the Church of Jesus Christ.

Instead each one is “preaching the good news of salvation with love”, tearing down the other. All any imam, atheist or agnostic has to do is look carefully at the body of believers, play Paul and act out Acts 23:1-10.

Sometimes it becomes necessary to “split”. It does not have to be over a theological issue.

The classical example is Paul and Barnabas’ disagreement over young John Mark. It was their “mountain between them”.

“And after some days, Paul said to Barnabas, ‘Come then, let us return and visit the brothers in every town in which we proclaimed the word of the Lord, to see how they are doing.’

“Now Barnabas wanted to take John who was called Mark along also, but Paul held the opinion they should not take this one along, who departed from them in Pamphylia and did not accompany them in the work.

“And a sharp disagreement took place, so that they separated from one another. And Barnabas took along Mark and sailed away to Cyprus, but Paul chose Silas and departed, after being commended to the grace of the Lord by the brothers.

“And he traveled through Syria and Cilicia, strengthening the churches.” Acts 15:36-41 Lexham English Bible (LEB)

In Acts 13 these two men were chosen by the Holy Spirit to be a team. Did they defy the divine calling by separating or splitting over their personal disagreement?

Questions to ponder from the first century as well in 2017.

ROTTEN TOMATOES,
my go-to site, to read up on any movie before I see it,
is a compilation of reviews from many different newspaper movie critics.

Most movie critics gave this film a rather negative and cool rating, some so disparaging, I think I will pass on it, even though the premise originally seemed exciting, and I like Kate Winslet, the lead actress.