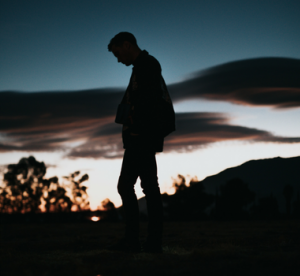 My mother was dead and my father consented — I withdrew my college fund and split. I was done with small town mentality and narrow-mindedness, tired of the prescribed life, proscriptions and rules that restricted my existence; I was on to better things. As Father wished me well and said he loved me, I flapped my wings and leaped from the nest, the known for the unknown, thrilling anticipation jetted me down the road, rebellion’s attraction exhilarating. Life is like that. In a blur I was gone.

Big City lights buzzing with all the inventions of life and promises attracted me like iron to a magnet. I was young, had money, boundless dreams and other sundry illusions, and there was no stopping the wheels of destiny. The gospel of Luke calls it the “far country,” or the “distant country.” I thought of it as my life to live.

Met Marne in a bar. She had a boyfriend in a wheelchair named Fox. She was a prostitute, and I liked her instantly. Her hair bounced, her eyes sparkled, and her alluring smile imprisoned me; I was smitten. We’d see each other behind Fox’s back until he died unexpectedly and we moved in together. I flashed cash around like autumn leaves in a windstorm and found a life of debauchery rousing the fast lane provocative, grabbing life by its neck. Marne became pregnant, said it was mine. The baby died at birth, it all happened so fast I cried for days.

After several years my money was gone. Simultaneously an economic crash and jobs vanished, too. I sold my car. Marne said I had to move out if I couldn’t share the rent. She became impossible, so to save our friendship I bolted. I wandered the streets, sleeping on couches of friends until they tired of me, then park benches and abandoned doorways sufficed as sleeping quarters. I ate discarded food from dumpsters behind restaurants or food at homeless shelters, but on the run I never stayed long. My life unregulated and panhandling my new craft, I was free and shackled, I wondered if my father was still alive. I swore I saw my older brother stealing around a corner in haste, it happened so fast.

The far country is populated by more than the “behaves” and the “depraves,” it is also populated by the sanctimonious judgmental types, who look down their holier-than-thou noses in disapproval of humanity’s rabble, too good to realize they are no better, the “habitation of devils and the cage of every unclean and hateful bird” (Revelation 18:2). The far country is their world, too.

On Sunday I witnessed street-corner preachers screaming their “good news” about the end of the world at incredulous on-lookers. Some in the crowd murmured their world ended long ago. I had heard it all before. The preacher kept referring to a Brother Wise and his counsel on the Bible, we wondered if Bro. Wise was Jesus’ cousin.

But is was Leviticus Deuter, affectionately known as Levi, who cast a dark shadow over the irreverent street throng whenever he was forced for religious reasons to mingle. A tall bald man with wraparound hair, deep set squinty eyes, a long pious nose, dressed imperiously in a dark suit, with head held high, certain his propositional truth was what the masses hungered. And those who agreed with him were sure of it. He chaired an impressive church, a selective church as high-minded and arrogant as he. They boasted their doctrines would save the world, Brother Wise prophesied as much. I kept my distance from this smug papal man, and his devout followers, knowing I was too decadent for their gospel and too wounded to want it.

Fifteen years on the street, my skin sooty, fingernails grimy, my hair matted, my beard steel wool, emitting foul odors, my step shuffled, my posture stooped shoeless. I was scraping the bare realities of unrestricted street life. Occasionally Marne would find me and bring me food but kept her distance. When I got hepatitis she paid for a doctor and hospital but disappeared when I rebounded. She was older now and I wondered if she still did tricks. Where did the money come from? She never said.

Across the street a curtain slowly closed in a shabby hotel room.

Unemployed for years, few hire those who have an inexcusable history of not working. I resorted to stealing from offering plates, begging, selling my body, my integrity, my self-respect, it didn’t matter. Street survival has no mores. I was spit upon, beat up — once had my head split open over a beer dispute — mocked, abused, banned, dejected. I learned freedom could play rough. I drank to forget, to numb the pain, a respite from the ugly plight I had created as I plummeted deeper into the abyss. I drank too much, I drank all the time. Reality is schizophrenic coldblooded and yet, in spite of its merciless wrath, sometimes an anonymous act of kindness would offer food, provide me clothes, or a program promising stability. Marne seemed to show up when I needed help most. Those moments made me wonder if someone was watching over me, a lingering vestige of childhood.

Sometimes freezing, always hungry, I took showers when occasioned by shelters I infrequently habited, but most of the time I smelled like a construction porta-potty in August. I often sought out my nosegay Betty’s Bakery and the aroma of fresh baked bread providing hope of something better. I recalled Mom’s cooking and the wonderful smells wafting from her kitchen. I was living at the bottom of nastiness and developed a strange rash.

For weeks the rash, like an invading army, worsened. I slept little and itched like a sewing machine. Marne appeared ravishing and took me to an infirmary. She said little but made sure I got a shower, clean clothes, and the ointments the doctor prescribed. She was my guardian angel, said business was good, and left me on the street corner with twenty bucks in my pocket. I bought a jug of wine to get me through the night. I felt no pain, scratching zealously as if the end was near.

Someone left me sandwiches and water. Ointments depleted, the rash ulcerated, blood and pus oozed from my mucky flesh, infection spread throughout my body. Sepsis developed, I collapsed on the street, and rushed to a hospital.

I dreamed I was a child back home, enjoying my parent’s winsome life, eating Mom’s cooking and enjoying Dad’s humor. In the dream, Dad kept calling my name. I woke up too sick to move, the doctors oft to the side whispered ominously as Marne next to me whispered hope. I told her I wanted to go home. She thought I meant heaven. “No,” I said, “my Father’s place, my home, I miss it. Feels like several lifetimes ago, this life waits for no one…time is fuzzy illusion.”

Marne remarked it felt as though my Father had been around even before I met her in the bar, as if He was waiting for me to arrive. Her gaze drifted out the window as she muttered under her breath, “Strange.” She said he had tracked me for years, always nearby. “How do you know? And how did he find you,” I asked. She said she believed in miracles.

Talking hurt, but there was a knock at my room door, so I faintly said, “Come in.” It opened and there stood my Father. He slowly walked over to my bedside.

I forgot how kind his face was, how dark his eyes were, soft, penetrating, compassionate. He smiled and said, “Hello stranger,” and reached for my hand.

“The years sure flew by didn’t they? Seems like you just left yet it seems like forever too, I never wanted to bug you, but I couldn’t keep away while I desired you free. I rented a cheap room so I’d be in the neighborhood inconspicuous but in touch. Sitting home with you gone and waiting for you to return was impossible. I had to join your world to better understand what compelled you to leave; I didn’t want to forego your experience. Forgive me for shadowing you but I missed you horribly.”

I stared at him, my mind trying to sponge the meaning. He continued, “I left the business in your brother’s hands in search of your whereabouts. Our place was too empty without you, I had to find you.” He gazed into my eyes and said, “Son, please know this: no one loves you like I do. No one. When you’re well and ready, you come home. There’s a party of celebration awaiting your homecoming.”

I whispered, “deal” and asked him to watch over Marne. He said, “Of course, always, I adopted her, she’s my daughter now, part of our family.” My smile dragged itself across enervation.

My father never left my bedside as he watched his son die in the hospital a week later. It happened so fast, he wept for days.

The Incarnation —Immanuel — is the dominant story of Scripture; it is the Good News, the most prominent biblical truth, the heart of the biblical narrative. As someone once said, “You can’t get to Easter without going through Christmas.”

God Himself ventures to the “far country” in search of His children, not leaving to chance their return. Like the shepherd leaving 99 to seek one lost sheep, the Father ventures to the bowels ofMoloch, the ends of being, and the depths of hell to retrieve His wayward children (John 14:9-11). Enough patient waiting, he waits no longer, He leaves His mysterious cosmology above the heavens, that celestial Arcadia, abandoning glorious regions over the rainbow, beyond the mysterious horizon where the sun never sets and immerses Himself in our dark world as one of us — flesh and blood — knowing full well we reside depraved and godless. But wherever we abide, there you will find Him. Whatever our condition, His restorative love embraces. God delights in you and me and invites us to be His steady Presence in a world without moorings.

The whole human family are constituents of the “distant country.” God, our Father, is also a citizen of the “far country” knowing no boundaries of His compassion. The Incarnation assures we are infinitely loved, never alone, and promises us a homecoming celebration down the road.

Photo by Nathan Dumlao on Unsplash

This is a companion discussion topic for the original entry at http://spectrummagazine.org/node/8869
2 Likes
ereifsnyder (Ed Reifsnyder) July 7, 2018, 1:22am #2

But the Adventist story is quite different. That story is the Son took the money and played the market and made tons of money so much that the Father came and made him an example for the universe.

THIS is the story of my Father, my God. Thank you.