The Promise and the Bond of Trust

One of the ways to read the narratives of the Hebrew Bible involves following Jesus’s method of explaining the Old Testament on the topic of marriage and divorce in Matthew 19. Jesus outlines two principles that I find helpful for understanding not only this topic, but a number of others as well, including the covenants. The first of these two principles is to appeal to the beginning. For example, what did God originally do or say within the setting of creation? (vv. 4, 8). The second principle recognizes that some things (maybe many things) in the Hebrew Bible are allowed because the people’s hearts are hard (v. 8). I find these two principles helpful when applied to the topic of the covenants. For this reason, I will begin with the first covenant, given to Noah.

It is important to understand that Genesis 1-3 was not written in the Garden of Eden. This text was written many centuries later. And it is important to understand that this text is not the past, (the past no longer exists), but a historian’s representation of the past. The historian, much like an author of fiction, chooses among an array of facts and picks those that are helpful to support his or her particular point of view. If Genesis 1-3 had been written by a different author in a different historical context, the text would be remarkably different. Genesis 1-3 is historically conditioned.

Why did the author champion marriage? He or she probably did so in response to the gross sexual immorality of the ancient Israelites. They would copulate with anything that moved, including little girls and animals, as specifically reflected by the adumbration of sexual offenses set forth in the Pentateuch and more generally reflected by the rite of circumcision.

So did the doctrine of marriage originate in the Garden of Eden or in Genesis 1-3, which was written many centuries later? The answer to this question is best articulated by what I wrote many years ago in a small homily published on this site: “The law of God can be compared to safety concerns that bracket in time a fatal car wreck that occurs at an unmarked intersection. A benevolent concern for others is a universal sentiment that precedes the car wreck, but placement of the stop sign follows the car wreck. Law precedes sin and sin precedes law.”

The Seventh-day Adventist appeal to the story of humanity before sin, done for the purpose of avoiding the reality and complexity of historicism, is hermeneutical error.

This is just a digression I have felt moved to write. Thank you for this thoughtful and interesting essay.

Thank you Dr. Sheldon for the light that you shine on a subject that seems so clouded by a hundred shades of darkness. I deeply appreciate the use of the Jesus-centered method of understanding of Old Testament narratives to shine the light on covenant. I have never before heard an explanation of the cutting ceremony that made any sense to me. Now for the first time have a clear path forward to understanding better the character of God in the faithfulness of Jesus.

I have been deeply frustrated with the teaching that man’s obedience is pivotal for God’s faithfulness. Thank you the clarity you brought to the Abraham narrative and the Pauline understanding of that same narrative. Your explanation inspires my soul to praise. Thanks for your sharing.

I learned about the Abrahamic covenant several years ago from this sermon from Timothy Keller. I thought you might enjoy this as well. 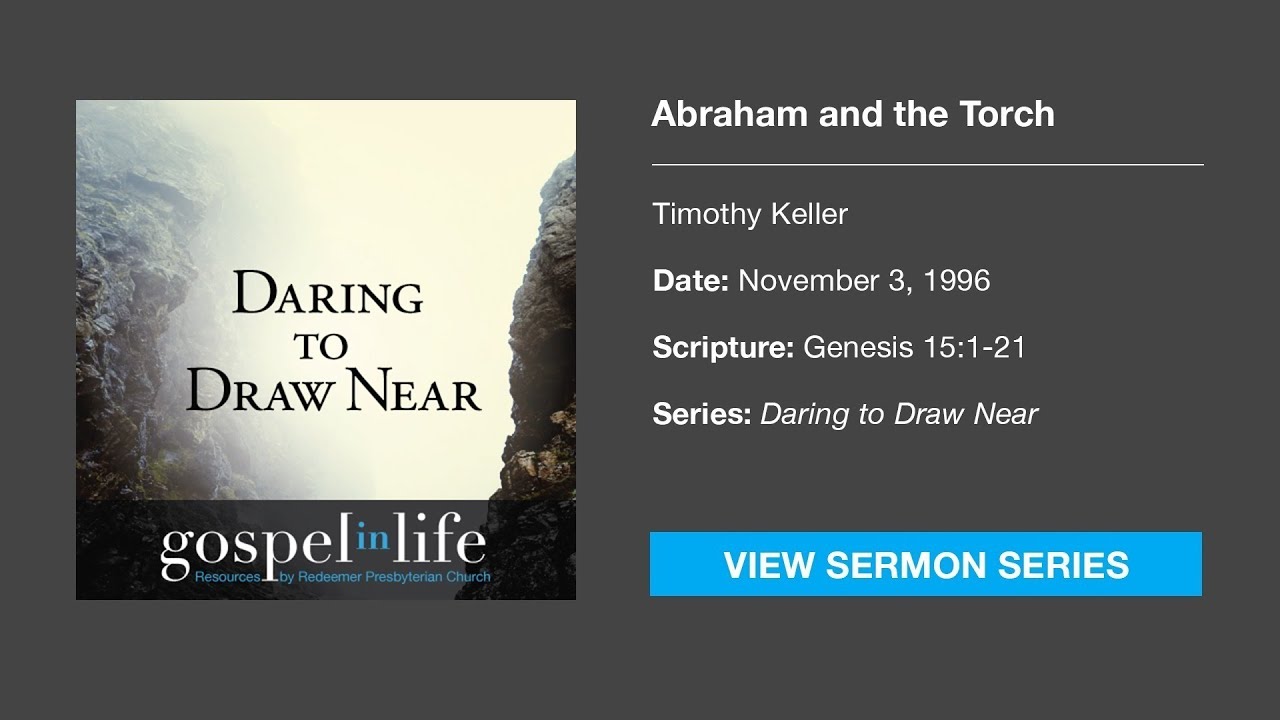 I think we need to be careful of the idea that the New Covenant, after the model of the covenant with Abraham, is something that requires no response, or just the inward assent of faith, as opposed to a moral works oriented covenant of law. I don’t think that this is what Paul was primarily driving at.

The works in question were Jewish deeds of Torah, circumcision, kosher, holy time observance, the outward identifiers of belonging to the covenant people. The NT controversy centered around circumcision, as the entrance sign of belonging, and of taking up life under Torah… to become fully Jewish, in addition to faith in Jesus as messiah.

Paul was saying that Gentiles, who believed in/gave allegiance to and joined up with messiah, became his followers and received his powerful transforming spirit, were not required to be circumcised, and live life under the Torah. They did not need to become Torah observant Jews. In fact, the time of the Torah was up. It was temporary, pointing to what has now begun, new covenant/new creation in the messiah.

This is why Paul points to the idea that Abraham’s faith in God was counted as righteousness/faithfulness to the covenant, before he was circumcised. He was the model of God revealing his own righteousness/covenant faithfulness in the messiah to faith, totally separate from Torah observance. Inclusion into God’s new covenant people was the same for Jews and Gentiles…faith in the messiah.

But, that faith was and is an active response. It was not only believing the promises of God in Christ, it was joining with Christ in loyalty to him. It was becoming a disciple, to follow him where he would lead. It was living a life together in the spirit in love, that is actually obedience to Jesus as the lord of self giving love.

This faith is not perfectionism, as seen in Adventist circles, but it is a way of life to which they were and we are still called. The life of forgiven messiah people, who individually and together are his new creation in this world.