The Writing on the Wall (in Daniel and Now)

Daniel is the book of origin for phrases that have made it into the English language. Two such idioms are found in the fifth chapter of the book, the writing on the wall and weighed in the balances. That’s not a small feat for a book.

This is a good time to read it again and to internalize the writing on the wall in our time.

Tonight, on February 4, 2020, the president of the most powerful country on earth will give an address known as the State of the Union. The country I have in mind is more powerful by orders of magnitude than Babylon ever was. It trades with China and has recently engaged in a trade war with that country. It has more than fifty thousand soldiers and military personnel stationed in the very region where the original writing on the wall took place. It has just released a peace plan for the country of origin of Daniel and his friends in Babylon. The influence of this country is global in a way that makes ancient Babylon look like Gulliver’s discovery of the island of Lilliput.

What will the speaker say tonight to the members of the legislature and the Supreme Court? I know what he will say. He will say that the State of the Union is strong. He will say that things are going well, in trade, military power, peace-making, and deal-making. He will point to employment statistics and metrics of economic growth. His speech will differ from speeches given by himself and his predecessors only by being more confident, self-assured, and optimistic. I predict that his audience will rise to their feet and interrupt his speech with applause more times than ever in the history of speeches of this kind. He will also, if I may steal a phrase from the fifth chapter in the Book of Daniel, praise gods well known in the history of humanity, “the gods of gold and silver, bronze, iron, wood, and stone” (Dan. 5:4). And his audience is likely to cheer him with enthusiasm as uncritical as on that memorable night in Babylon.

To overcome the distance and the cognitive dissonance between the text in our hand and the topic of our speeches, consider this: “The gods of gold and silver” reflect a value system that measures progress on the scale of material prosperity. It is oblivious to other criteria; it thinks chiefly in economic terms. If Nebuchadnezzar and Belshazzar had listened to Daniel for more than the moments of crisis, they might have learned that reality has other measurements for prosperity and plenitude. We learn in Daniel that it was God who let the Babylonians conquer the tiny state of Judah and carry off captives (Dan. 1:1-2). We see Daniel discover in sacred writings that the time of captivity would be “seventy years” (Dan. 9:1-2; cf. Jer. 25:11-12; 29:10; 2 Chron. 36:21). This is on the surface of the texts, and many readers have seen it.

Why seventy years, however? This is not discussed in Daniel, but it is explained in the texts that stipulate a period of captivity lasting seventy years.

He took into exile in Babylon those who had escaped from the sword, and they became servants to him and to his sons until the establishment of the kingdom of Persia, to fulfill the word of the LORD by the mouth of Jeremiah, until the land had made up for its sabbaths. All the days that it lay desolate it kept sabbath, to fulfill seventy years (2 Chron. 36:20-21).

Why seventy years, we ask again. And here is the answer: the writer of the ancient text applies criteria other than economics for what is good. Seventy years of captivity it will be, “until the land had made up for its sabbaths” (2 Chron. 36:20). The seventy years reflect 490 years of non-observance of the sabbatical year (2 Chron. 36:20-21; Lev. 25:3-5). This is one of the outposts of the seventh day Sabbath. The latter is well known in my reading community, but the land sabbath is not. The land sabbath is a statute aiming for sustainability, rest, and plenitude. It includes economics, too, the economics of long-term thinking rather than short-sighted and self-defeating pursuits. It knows that economics cannot be divorced from ecology. To put this in contemporary terms: the seventy years of captivity is the measure of Israel’s ecological sins. They, too, had worshiped “the gods of silver and gold” without consideration for other values.

Babylon was located in a region of the world that used to be known as the Fertile Crescent. It was for a long time the breadbasket of the empires that ruled the region, its fertility enduring well into Roman times. It is not fertile any longer; most of it is now salt-infested desert and land on which nothing grows. This makes it easier for us to connect the dots between the seventy years of captivity for Israel’s ecological sins, the writing on the wall for Belshazzar’s brazen allegiance to “the gods of silver and gold,” our love for the same gods, and our inability to see the writing on the wall.

Daniel and the English Idioms

When we use the phrase the writing on the wall in English today, the connotation differs from what we have in Daniel. There, Belshazzar sees the hand — he “was watching the hand as it wrote” (Dan. 5:5). The impact was immediate and intense. “Then the king’s face turned pale, and his thoughts terrified him. His limbs gave way, and his knees knocked together” (Dan. 5:6). This is the gist in the original setting: the king is aware of the writing on the wall. The next moment, his only thought is to find someone who can read it (Dan. 5:7-16).

But this is not how the phrase functions in English today. Today, the accent falls on not seeing the writing. We often put it like this: he or she or they do not see the writing on the wall. There is writing in our time, too, as in Daniel. There is communication, an attempt to get the attention of those who need the awareness, but we don’t see it.

I have given a name to “the gods of silver and gold” in our time. Do “the gods or iron” have a name? They do. We can call them military hardware. Babylon was a strong military power, but its implements with which to wage war were nothing compared to what we have in our times. This, too, could be writing on the wall, a civilization caught between the prospect of ecological holocaust (the slow track) and nuclear holocaust (the fast track). Those who know the score, say that the world’s nuclear arsenals are sufficient to annihilate life on our planet. I read about this many years ago in Jonathan Schell’s book, The Fate of the Earth (1982). He has written many updates since then, but the message is the same: the gods on which the leading countries in the world rely for security, are gods that have the power to annihilate us. Should this insight, too, be included in the speech?

Weighed in the Balances

“Thou art weighed in the balances and art found wanting,” Daniel tells the king, here in the regal diction of the King James Version (Dan. 5:27). The Aramaic word is “tekel” — to be weighed. “Weighing” is a feature of biblical thought; we cannot deny it. It is also a feature of reality — whether we do what reality demands. Reality in the twenty-first century has writing on the wall; civilization is weighed in the balances of reality. I wonder whether we, as a reading community, sees the writing on the wall? Do we, like Daniel, have the ability and the courage to read the writing faithfully for our time?

Sigve Tonstad is Professor of Theology at Loma Linda University's School of Religion.

This is a companion discussion topic for the original entry at http://spectrummagazine.org/node/10190
1 Like
Harry_Elliott (Harry Elliott) February 5, 2020, 3:36am #2

A bit of trivia.

I notice that the writing in the illustration is being done correctly, from right to left. (The artist cleverly shows the final character being completed in the lower left corner.)

My pettest peeve in illustrations of Biblical subjects is wings on angels, closely followed by the substitution of angels where the Bible says cherubim–a universal blunder championed by the Indiana Jones film, incidentally.

I believe that wings are never mentioned on angels in the Bible. I like to think that that’s the reason that wings were removed from the Review’s latter-day logo. As far as I know, cherubim both fly and speak with their wings, whereas angels do both without either. 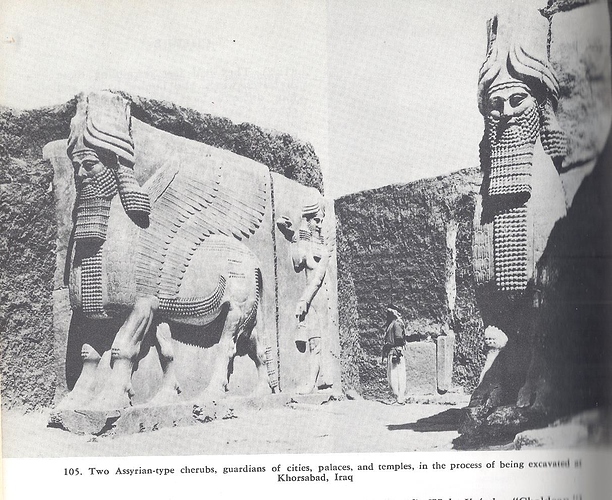 P.S. I believe that wings are never mentioned on angels in the Bible. I like to think that that’s the reason that wings were removed from the Review’s latter-day logo. As far as I know, cherubim both fly and speak with their wings, whereas angels do both without either.

These winged beings are called lamassu in Assyria and Babylonia. They were protective spirits that defended someone or something from evil. They should protect entrances because that was the space where evil could come in. Therefore, this space had to be specially protected. They could also be the protective spirit for a human or a town. Interestingly, they could be female. There is even a medical texts that mentions a lamassu with a penis and a vulva. As intermediary numina, their role was pretty similar to our guardian angels. Thank you for making this connection, interesting stuff, no trivia, Harry!

Excellent article that shows how current events around us fulfill the prophecies that are relevant for us today. After the State of The Union speech last night by President Trump I needed to read this timely piece of writing.

They should protect entrances because that was the space where evil could come in.

Thanks for the rewarding response! Now that you mention it, in the Bible they were stationed to guard the entrances to Eden and to God’s throne in the Most Holy Place, specifically on either side of His footstool where covenants with His vassals would be stored. Richard Elliott Freedman observed that the sphynx was a cherub. (Perhaps the female survivor of an original pair?)

And what about the emotional reality show to make people hate the immigrants and threat suing those who dare to protect them?

Tonstad is so refreshing again! Allow me to add some random associations. Daniel 5 is a feast for the senses:

And much more. Daniel chapter 5 is for many good reasons one of the famous passages from the Bible.

Thank you so much, Professor Tonstad, and other helpful commenters here. Today in the SS class I attended we got no insights like this, only read the lesson guide, read the answers, heard a few EGG quotations, and finished early. Depressing.

, you got your own SS class here. Spiritual food. God doesn’t let you spiritually starve. When the local church fails, He provides elsewhere. That’s why articles like these and the discussions are so important.