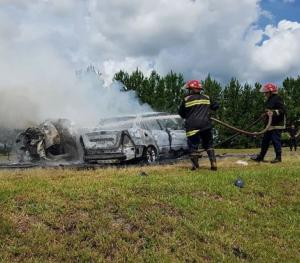 The first accident occurred on February 10, resulting in the loss of Professor Glenda Bernhardt, 40, Yoselene Bernhardt, 41, and Juan Sebastian Dávila, 13, a middle-school student. The three were traveling on the Rosario-Victoria Bridge, an informal name given to the physical connection between the Argentine cities of Rosario and Victoria and is composed of several bridges, viaducts and earth-filled sections, when they lost their lives.

The next day, February 11, five other individuals connected with the university lost their lives in a car accident occurring in the Misiones province of Argentina. The deceased include university students Karen Maylen Arroyo, 20, and her cousin, Lucas Tomás Leguizamón, 19, Karen’s parents, David Arroyo Arancibia, 56, and Miriam Viviana, 47, and brother, Santiago David, 8.

After hearing this tragic news, Pastor Ted N.C. Wilson, president of the General Conference of Seventh-day Adventists, wrote in an email:

“Nancy and I are currently in India, but our hearts go out to the families at the Adventist University of La Plata (UAP) in Argentina who have been affected by this terrible, tragic accident. The entire campus of UAP has been sadly influenced by this tragedy.

“On behalf of the worldwide family of Seventh-day Adventists, we share our heart-felt Christian sympathy to the Bernhard, Bernhardt, Dávila, Arroyo, and Leguizamón families, who have been touched so dramatically by this difficult and sad situation.

“What a hope we have in Christ and His soon coming when the trumpet of God will awaken all those who have died in Christ. Even, so come, Lord Jesus!”

Looking to this same hope, the university said in a statement “We cling to the blessed hope of reunion with our Savior Jesus Christ and with these children of God who rest awaiting his return.”

Praying for these dear families and communities in this horrific loss. May God provide comfort.

Everyone knows that life is not fair, even though we would like to think it should be.