This week on Imago Gei, I interview Ari Bates, a transgender woman currently studying and employed at Southern Adventist University. After publicly coming out as transgender, she was made aware of a new policy that will be implemented on Southern's campus requiring transgender students to dress according to their gender assigned at birth.

Thanks for this edition of the podcast, Kendra Arsenaux.

It’s always sad to hear stories about young people who fear being kicked out of school; who jobs are threatened; whose parents have disowned them, etc., etc., because they admit to being gay, transgender, or a member of another sexual minority. It was pretty wrenching hearing this part of Ari Bates’ story.

As I said in another post about this incident, I’m not sure what the stakes are for Southern AU. I don’t know why they are so compelled to make a person change their clothes who says — employing the common parlance — they are “a female trapped in a male body.”

In other words, if Ari is right, then let Ari wear women’s clothes. If Ari is wrong, Ari has bigger problems that sartorial ones.

What hit me tonight, though, is this: In most instances, if you’re asked to have compassion on and empathy for someone telling you their story, but their story contains a significant transposition in logic, usually what happens is you get suspicious. You don’t feel more sorry for them. Instead, what dawns is the sense you’re being set up, or conned.

I think this is the source of primeval discomfort many experience, not toward transgenderism, as such, but re: its militant variety; the sort which drives people to bellow, “I AM A WOMAN, PERIOD!” 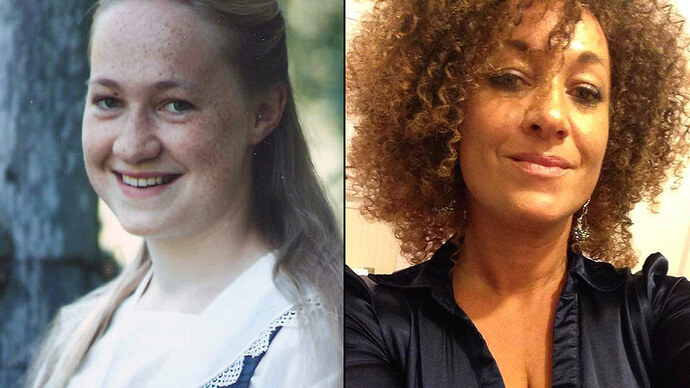 I’ve never heard any woman I know say, “I am a woman, period.” Or to put it in other terms, after Rachel Dolezal, above, was found to have been impersonating being Black in 2015, the worst part about it, perhaps, was, even though busted, she kept on insisting she was Black.

The frequent counsel we receive from people who advocate for the LGBTQIAP community is we are to accept their noodly semantics per sex & gender with naught but a warm glow. If we don’t, we’re told, they will kill themselves.

This can’t be as exhausting as being trapped in the body of the opposite sex, I am certain. But it is its own little kind of cognitive oubliette.

I’m very much for transgender people’s healing, safety, job security, and happiness. I’m certain I don’t support everything they want, but nor do I know all they want, or how it affects me.

But, until this era, I’ve never encountered a belief system which required me to concur with another person’s thoughts; i.e., with who they think they are, lest I be deemed knuckle-dragging and bigoted.

I don’t necessarily think saying you’re a woman, based on how you feel, is going too far. Telling me I have to agree with you, though, truly is.

This is pretty gross. You seem to think you’re offering some kind of… kindness here, but you aren’t. You’re condescending. All you’ve said boils down to,

“I wish you well, but also you are wrong. And let me mischaracterize you and what you’re asking for while I’m at it.”

It’s called basic dignity. Something men walk through the world largely expecting to receive but very often putting stipulations on how they hand it out to others. Perhaps if you stopped drawing false equivalencies between immutable physical characteristics and one’s gender identity, putting aside your ego and interpretation of logic, you might be able to see that’s all people want.
No one has to use your given name or culturally-defined-gender-pronouns despite you asking them to, but most people probably do because they believe in offering you basic dignity and personhood.

Logic is its own little noodle, though, don’t you think? A word most often—outside mathematics and computers—used to convey a sort of absolute, as if anything we currently perceive as true is perfectly so. A word used to convey in a neat little package, “This is fact!”
With that in mind, it largely seems that you approach at least this topic with, “How can I fit this into my current logical model?”
On top of all that, you have the audacity (even by proxy of “many”) to complain about the “militancy” of people asking for dignity, these same people who are actually killed for looking or acting differently than what others want of them? I mean, can it be any more incredible than worrying more about someone saying, “LET ME BE,” than that person being killed? I suppose it can; not the first thing for which people have had such priorities. And if you understand the difference, what are you doing wasting your time talking about how others are offended by people asking for dignity?

In the end it shows you do not comprehend the stakes, and it is truly sad.