On July 13, the GC Office of General Counsel issued a travel agency fraud warning to conferences, churches, universities, and schools after receiving multiple reports from entities that engaged Insouciance Abroad Travel Agency. This is the GC's second fraud warning regarding the company.

The travel agency is owned and managed by Seventh-day Adventist Peter Lombard. In an email to Spectrum, GC Director of Communications Dan Weber states that “Lombard, through his agency, has taken financial advantage of many Adventist institutions to the tune of hundreds of thousands of dollars.”

The General Counsel’s warning letter states that several Adventist institutions including “a Conference, a Church, a College and several High Schools” have all reported fraud by Insouciance Abroad.

The letter goes on to state that after paying substantial funds to the travel agency,

[the institutions] all discovered, either right before or during the trip that their airline tickets, hotel accommodations, and/or the excursion arrangements were not paid for by Insouciance Abroad as expected. As a result the parties were left scrambling to make last minute arrangements or had to cancel their trips outright. It has been reported that Peter Lombard and Insouciance Abroad are still marketing their services to Adventist institutions.

The letter strongly urges Adventist institutions to only utilize travel agents that are licensed and bonded. The General Conference is also asking anyone who has an upcoming trip booked through Insouciance Abroad, or has had a similar experience with them in the past, to contact Josue Pierre, associate General Counsel, via email at pierrej@gc.adventist.org.

The letter in its entirety is included below.

**July 18 UPDATE**: Peter Lombard has responded to our request for comment and has stated he is preparing a response to these allegations. **July 25 UPDATE:** Follow-up communications with Peter Lombard regarding the situation and the statement he previously said he was preparing have gone unanswered. **August 2 UPDATE:** Peter Lombard has responded to the allegations with the following statement: _The allegations against Insouciance Abroad engaging in fraud are false. Over the past 12+ years we have worked with hundreds of satisfied groups throughout the church. Over these years we have had trips that have been canceled for various reasons, for which we have always provided refunds. Recently we have had similar cancellations and we are in the process of, or have completed, repayment for each of those trips. We regret the impact these cancellations have had and will ensure that at the very least each traveler receives their full money back._

i’m really hoping there’s another side to this story…i recall peter as a genuinely talented, yet nice, person, who always seemed to have a good head for schedules, itineraries and bargains…i believe he got his start in the group traveling business as a result of learning the tricks of the trade in the many New England Youth Ensemble overseas tours, which he ultimately ended up managing singlehandedly - this would have been during either the early or late '80’s, if i’m remembering correctly, and i’m forgetting now what his instrument in the ensemble was…he got so proficient that virginia-gene rittenhouse, the director, was sending everybody to him if they had any question about anything on their itinerary…she seemed to relish and even take pride in knowing nothing about the touring schedule because she was so certain that peter would know every last detail…she used to refer to him as a walking computer, which was so apt: peter just never seemed to make mistakes…we absolutely never had problems with him in charge…

i’m gathering that he must have branched out from NEYE over the yrs, although still apparently focused on group travel within the church…i’d like to think there’s a simple explanation for what is being reported here…i cannot imagine peter not being organized and upfront, let alone possibly dishonest and swindling…

my hunch here is that as owner and president, peter had delegated the actual management of itineraries to subordinates, who may not have been as capable or scrupulous, or who were still learning on the job…

Has anyone reached out for Peter’s/Insouciance Abroad’s side of the story? This sounds unlike him from my interaction with him in the past.

We reached out to Peter when we became aware of the situation and are awaiting his response to the allegations.

I find the GC letter misleading. The heading is fraud but the description talks about people or organizations having to pay more than expected. There is a huge difference between fraud (an intentional crime) and a customer being surprised by having to make an unexpected payment. Most of us experience the latter on a regular basis–somehow it happens to me every time I rent a car–but that doesn’t give me a case against the rental company.

I find the letter to be to little, to late. This individual has been ripping off high school and university tour groups for many years. This is actually the second warning the GC has issued this one actually calls a spade, a spade. The letter is carefully worded because there are lawsuits in progress and pending and any official letter could impact the outcome of those lawsuits, or investigations by the FBI.

I have multiple friends and leaders of groups who had spoken directly with Peter in organizing their mission trip groups and they were given a false confirmation numbers up to the day of the trip and then Peter cut off all communication when the group asked for an updated itinerary or confirmation number. One group lost over $50,000 and had to re-raise all the money for a trip at a later date, another lost approximately $26,000 with the theft of money and NO services provided.

Other friends have eluded to this individual starting this sort of fraud, on the small scale, when he was a member of the NEYE and it got worse at WAU/CUC where several incidents occurred, but he was covered by sympathetic/well intended faculty/staff.

I find overall the preponderance of evidence and the pending and in process lawsuits indicate where there is smoke there is fire.

Below is a current pending law suit from Bonita Valley SDA against Peter and Insouiance.

Any update on his reply?

Peter has not yet responded to our several additional communication attempts.

This is the GC’s second fraud warning regarding the company.

This sounds eerily fishy for the reason that a first warning should have stopped the transactions. Except, now comes a second warning. Perhaps someone along the pipeline is getting a percentage of the proceeds?

Still no reply from Mr. Lombard?
It has been quite a while since these warnings came out and he still has no good answer, which can lead me to believe that it’s indeed fraud and he purposefully deceived his clients. Does anyone know if this company is still doing business with church entities (or anyone for that matter)?

Bonita Valley SDA Church had to sue Peter Lombard and he had to pay $53,000 back to them (see court document below). Have any other churches/schools affected sued him and got the money back? That seems the only way to get him to pay. 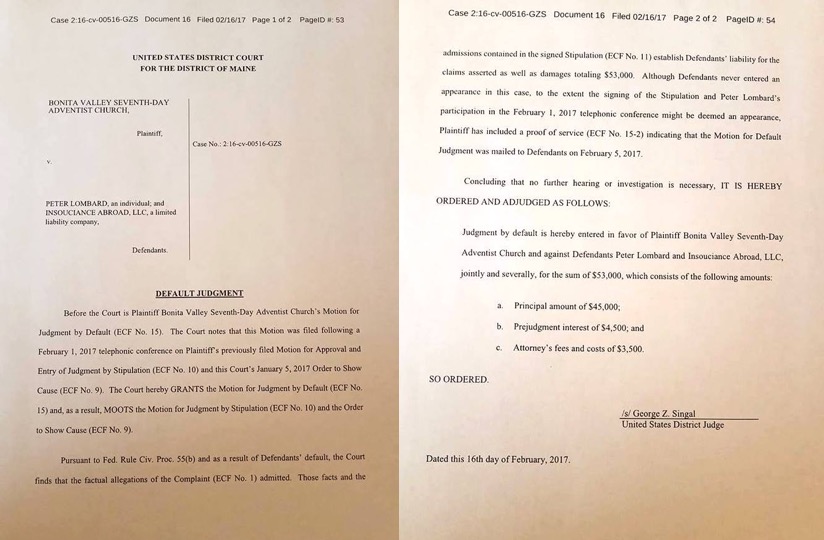 I worked for the company in 2015. Peter and I were friends before he hired me. Here are the facts of my own experience:

I was sent to Europe with a church high school tour as a guide, everything for the group was supposed to be pre-paid but was not. I arrived at a museum with the tour and the tickets were not reserved or paid for, this continued with hotels, meals etc. Peter convinced me that it was an error caused by bank issues and if I would cover the trip costs (for 45 teens) and file an expense report he would pay me back in two weeks. I spent over $20k of my own money to make sure those kids got their vacation. It’s been 27 months and over that time he has repaid $3k of what is owed. Even though he has agreed in writing he owes this money, because we didn’t put appropriate contracts in place prior to this event, I don’t have grounds to sue.

He is still operating the business, though he has moved out of the country.

I was among Peter’s last known scam victims this past summer. He organized a tour for a group that I had joined, and on the day that we were supposed to leave for Europe–after nearly a year of planning–he contacted the coordinator to say the trip had been cancelled. We were devastated. Students plans for school credit were derailed. Individuals lost thousands of dollars.

Peter had asked all 15 people to pay him directly, and no one has seen a penny of their money refunded despite his promises to do so. Communication from Peter soon dwindled to nearly nothing. All we know is that he is hiding in another country.

I was afraid that he would scam more groups, so I contacted my local Adventist Church communication department who then contacted the NAD. The NAD had issued an earlier warning in the Spring, but the language was indirect and soft; it was easily overlooked. After the General Conference heard about our situation, they issued a more direct and urgent warning to the public. This current letter, posted by Spectrum, is the result.

As soon as the GC letter was made public, I posted it on my Facebook wall. I started getting private messages from several people–some strangers–telling me that Peter had been scamming groups for years, even during his time with the New England Youth Symphony. Somehow, he kept getting away with it because he alternated successful trips with cancelled ones. Back then, either no one noticed a pattern or no one wanted to ask the hard questions about a fellow Adventist.

For those who are defending Peter, your loyalty is respected. I understand that you are friends. But do your research. Before you resort to conspiracy theories or blame other people, ask yourself why more than a dozen churches and schools, in recent years, have reported remarkably similar stories of cancelled trips and stolen funds. Why has no one been paid back? Why is Peter hopping from country to country?

Think twice before defending a man that has defrauded not only adults like me, but children who worked all year to save up for a mission trip. He’s used his Adventist badge to gain trust then manipulate. I hope that Spectrum’s article, along with word of mouth, will stop him from defrauding another group.

Where did he moved too?