“Unity Beards” by the Adventist Caricaturist 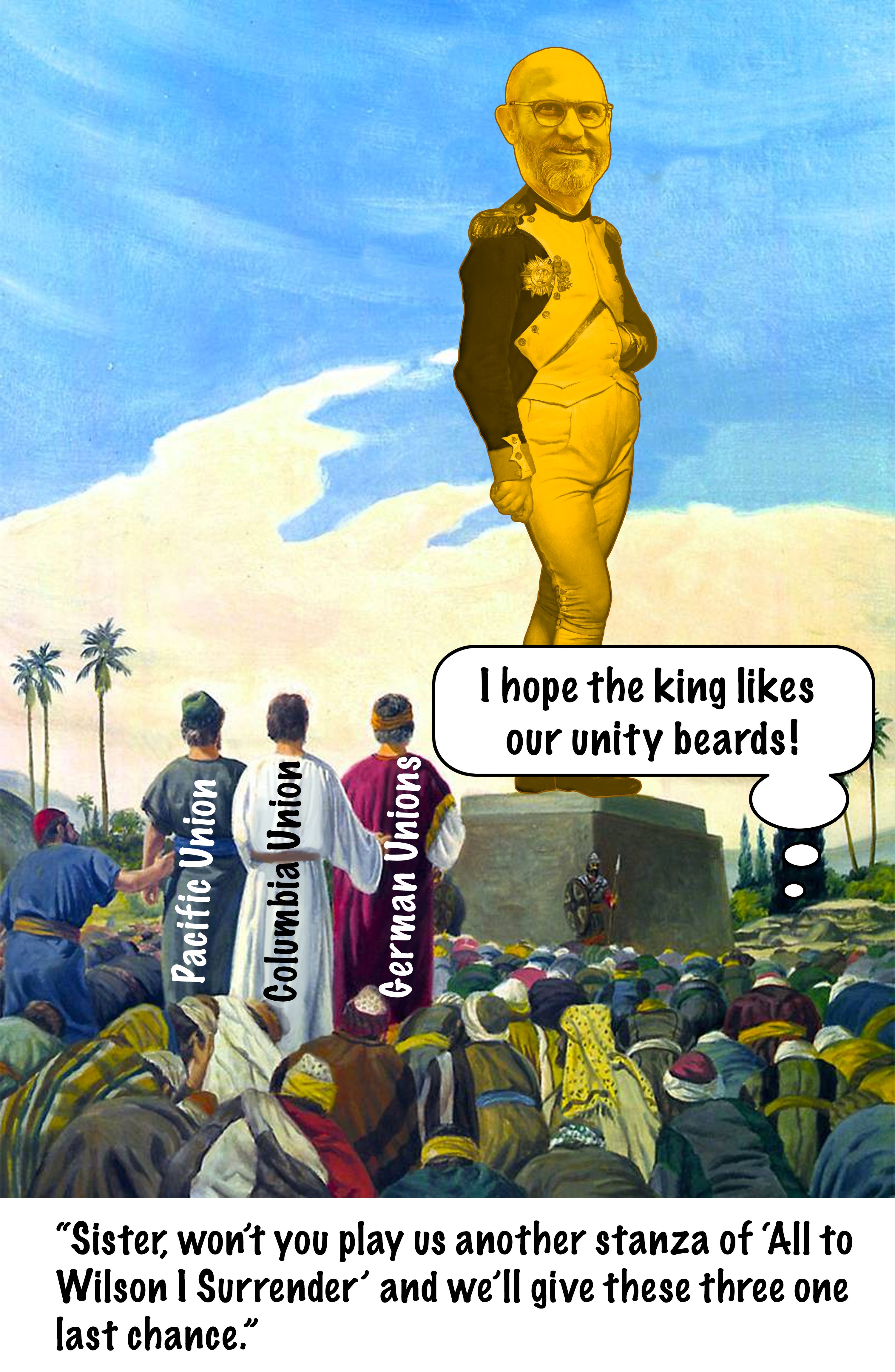 The Adventist Caricaturist weighs in on the upcoming Annual Council 2018.

It is hilarious…but what is disturbing? Is it too accurate??

Maybe “creepy” is a better word. This “king” guy’s picture always gives me the heebie-jeebies.

It happens every time his picture pops up.

Everything about his actions, his picture (countenance), his sermons/talks are really weird/strange/odd…to me. I have a visceral reaction to him.

Perhaps you don’t like the “polished” religious politician look.

Perhaps you don’t like the “polished” religious politician look.

More of a polished “religiosity” look…

That’s what I thought you were getting to…

Is it too accurate??

What’s missing is a Red Book as a Halo.

A picture paints a thousand words…

Oh, I see that’s the clue: “You shall know them by their beards.”
You don’t have to count the votes. Just count the beards. Maybe some presidents should shave theirs if they had them before.

Hey fellows. considering the new non-compliance committees, I say bring it on. And then the first order of business is to rescind the president and the entire administrative “executive committee” for ignoring the counsel and advice of our early church Messenger. “if the Lord has located His sanctuary at Battle Creek (now elsewhere), and no other place, it is right and sensible to refer all questions to that place.” (1888 materials, chapter 186, letter to W.W. Prescott.

“if the Lord has located His sanctuary at Battle Creek (now elsewhere), and no other place, it is right and sensible to refer all questions to that place.” (1888 materials, chapter 186, letter to W.W. Prescott.

The context of that line, to prevent someone running off with the opposite of the true meaning:
“It is not in the order of God that men, supposed to be men of mind and judgment, should lay aside the privilege of acting for themselves, to depend on the decisions of the councils at Battle Creek. If the Lord has located His sanctuary at Battle Creek and in no other place, it is right and sensible to refer all questions to that place. But we know that He presides over every portion of His moral vineyard. To every man, according to his ability, He has given work, and this work is to be done.”

In its overreach, the GC is being non-compliant with Ellen White’s counsels on GC authority:

“Have those in Battle Creek been given superior reason and wisdom that God will not give those in the churches and conferences?”
(EGW, Testimonies to Ministers and Gospel Workers, p. 325)

“It has been a necessity to organize union conferences, that the General Conference shall not exercise dictation over all the separate conferences” (Ellen White, Manuscript 26, April 3, 1903).

“The division of the General Conference into disctrict union conferences was God’s arrangement. In the work of the Lord in these last days there should be no Jerusalem centres, no kingly power. And the work in the different countries is not to be tied up by contracts to the work centring in [the General Conference], for this is not God’s plan. Brethren are to counsel together; for we are just as much under the control of God in one part of His vineyard as in another” (General Conference Bulletin, April 10, 1903).

“The question of the great need of the soul deserves in these meetings of the [General] Conference far more attention, and many questions that are tossed into the [General] Conference should never appear, but be worked out in your state conferences. It has become habit to pass laws that do not always bear the signature of heaven.” EGW, 4 Nov 1889, Ms. 6-1889.

“The place, the circumstances, the interest, the moral sentiment of the people, will have to decide in many cases the course of action to be pursued” (EGW Ltr. 53, 1894, MR 714).

Thanks for the context, hopeful.

Thank you for those quotes, will use them with discretion.

This caricature is indeed meaningful. And sad.
The Wilson dynasty is really making a strong presence in the sDA books.
It’s a tragedy!

I have shared some of the concerns that have been expressed here in Spectrum with some social media groups I belong to on Facebook that are primary used by south east asia and africa and regularly post to as well. I thought this might be an opportunity to get feedback from a broad spectrum of believers on social media and wanted to share the results.

I provided a brief overview of the GC efforts to consolidate administrative and theological power and postulated that the methods and means are contrary to the Adventist approach to governance and counsel of EGW. I included the image as most posters will have images of various types to illustrate their points.

I have received a number of likes and a number of comments. The comments can be summed up into a few of which I will detail below:

For each respondent I provided the quotes from Ellen White and other Founders that repudiated such ideas and admonished the actions of the GC. As a result two of the sites after approving the posting have since removed it but I was able to gather the above information.

i get the plain of dura and the three hebrew worthies reference in this cartoon, but why is TW dressed in a napoleon outfit…is there a suggestion that annual council 2018 will be a battle of waterloo, and that TW will suffer an historic defeat…

if so, i think we’re looking at a progressives-only fantasy on one side of a coin…the fantasy on the other side, no doubt TW’s fantasy, and the fantasy of conservatives everywhere, is the one that references josiah wiping out the high places, the priests and altars of baal, the houses of the sodomites, and the wizards and familiar spirits to an extent never seen before, or since…

of course neither fantasy will be happening any time soon…annual council 2018 will come and go, as will annual council 2019…the only thing that matters is whether TW will accept a third term in indianapolis 2020, which i doubt…