The business meeting was preceded by an inspiring worship service during which Dr. Kendra Haloviak Valentine gave a stirring and telling message, “Growing Together in Christ.” She started off by saying that what bothers her the most about Paul is not his attitude to women (surprise!) but rather how he could watch someone being stoned. Yes, she said, he was converted, but how much of the “old ways of thinking” stuck with him? We of course value his statements that indicate there should be no distinctions between male and female, that in the church there should be no hierarchy of humans — God’s grace has broken that all down.

After retelling a time-honored illustration used by Dwight Moody about the watchman who waved his lantern before the conductor of an on-coming night train to keep the train from hurtling onto a broken bridge but in his panic failed to light the lantern before waving it, she said if you are talking about God without grace you’re waving a lamp without a light.

Yes, God’s grace is amazing and God’s grace is the great equalizer. Paul comes to understand this after seeing the risen Christ and in his interactions with Gentiles. However, when he tries to appease the Jewish Christian leaders in Jerusalem (Acts 21:17ff), he acts against this conviction and his conscience in fulfilling a vow that requires him to go into the part of the temple where first Gentiles, and then women, were excluded. Rather than gain those “zealous for the law,” Paul’s actions put his own life and ministry in jeopardy, and his arrest will lead toward his eventual death in Rome.

According to Ellen White in Acts of the Apostles, pages 405-406, Paul failed in this “conscience vs. compliance” moment. In other words, Paul was trying to appease the Christian leaders in Jerusalem in order to bring people to God, but instead hastened his own death by compromising God’s gospel of grace given to ALL people. Haloviak Valentine’s timely appeal: As we “grow together in Christ,” let us remember that people are longing for God’s grace. Therefore we need to wave the lamp of warning, but with the light of God’s grace.

In addition to Dr. Haloviak Valentine’s sermon, delegates were enveloped by praise and worship from the Praxis Team at Loma Linda University Church; watched a video, “What is a Church?”; watched the Adventurer Club from Waterman Visayan Church sing/act a musical number, “One Step at a Time”; participated in an opening prayer by Pastor Chris Oberg that truly lifted the delegates into heaven’s throne room; with the help of the Mt. Rubidoux Pathfinder Drum Corp and organist Elvin Rodriguez, the delegates sang “All Creatures of Our God and King”; listened as the six SECC officers read an appropriate responsive reading of gratitude and praise; heard three generations of the Zurek family — all of whom had grown up in the SECC — pray; and heard We Are UNO sing, “What a Beautiful Name.”

After Dr. Haloviak Valentine’s prayer, the delegates were bathed in the closing song, “Legacy of Faith,” sung by the mass choir from the Inland Empire Fil-Am Church. It was observed that seldom have that many Adventists gone to church Sunday morning and been so blessed in worship!

Representing the nearly 70,000 members of the SECC (the largest in North America), the delegates involved in the session were 63% male and 37% female. In terms of age, only 19% were under the age of forty. The session was extremely well-organized with everything necessary to educate the delegates sent to them well ahead of the meeting. Some thirteen new congregations and companies were welcomed during the last five years to the conference. Since most reports were shared ahead of time, only a few brief reports were given at the session, mostly by professionally-done videos. Unlike its predecessor, this quinquennium’s financial report has been in the black ever since President Roberts took the helm. The audit firm gave the conference a clean opinion. Rather than “business as usual” the delegates learned of the conference’s focused strategic plan called “A Compass for Our Future,” including in sections called Engage, Evangelize, Educate, and Equip. The By-Laws Committee, chaired by Attorney Juliana Madison, recommended several minor changes, mostly to reflect current practice. Except for one recommendation involving nomenclature, all changes (requiring a two-thirds majority) were voted.

To sustained applause, it was noted that the General Conference is out of compliance with regard to Fundamental Belief Number 14 (especially with regard to differential treatment between male and female) and that this could be partially rectified if they would at least list the name of SECC’s President, Dr. Sandra Roberts, which for five years has been blank in the Adventist Yearbook.

The newly-reelected and popular conference president closed the business session with a beautiful message of appreciation to the delegates for the unity they demonstrated together with the evident blessing of God, their Leader. The delegates were encouraged to pick up their sack lunches on their way out at about 1:30 p.m. (the session had begun at 9 a.m.).

The President of the North American Division, Elder Dan Jackson, was present along with some of his officers and the officers of the Pacific Union Conference, not to mention the presidents of our sister conferences, Southern California, and Nevada-Utah. While it had been rumored that the spirit of Silver Spring might be evident in the morning’s proceedings, thankfully that did not seem to be the case. Unity in Diversity prevailed without any heavy-handedness.

Lawrence T. Geraty is President Emeritus of La Sierra University and a constituent of the Southeastern California Conference.

Look at their examples and ask, “Why are our official leaders trying to disparage, discourage, and demand that women in spiritual leadership refrain from using their gifts of the Spirit?”

What a beautiful attitude and expression of confidence and affirmation in the priesthood of ALL Believers! God bless all our women in leadership! May their numbers increase for the sake of Christ and the Gospel.

While it had been rumored that the spirit of Silver Spring might be evident in the morning’s proceedings, thankfully that did not seem to be the case. Unity in Diversity prevailed without any heavy-handedness.

Welcome to the SECC!!! This is the way business is done around here.

According to Jesus, gender is not an issue in heaven, so why the big deal with Ted?

Is there something in the water in Southern Calif?
Looking at the demographics provided by Dr. Geraty, one would expect a different outcome
based on what we see in the Washington, D.C, North Virginia, Delaware areas.
Perhaps the water needs to be bottled and placed in water coolers on the various floors
of the office buildings.
Isn’t there a short song that begins “We are one in the Spirit”?
Seems that could be their Conference Theme Song! To be sung in every church every Sabbath.

Yes, she said, he was converted, but how much of the “old ways of thinking” stuck with him?

One of the oldest ways of thinking about male-female relations and equality was voiced by the equal and harmonious Creators in the creation of Adam and Eve in ‘Our image, male and female’. The God Family is old, but were they right ? Or did they make a not-‘very good’ mistake in the creation of this Earth and of mankind ?

But, as for Paul, thousands of years after the ‘fall’, he realized that his era of God’s church was not the last. He predicted what we now know as the ‘papacy’, (not the ‘mamacy’) when the ‘man of sin’ – alone, female-free at times – would preside over yet another ‘falling away’ by raising himself up, as if even over God
(II Thessalonians 2:3). This is now ‘old news’ to the world, but was the ‘papacy’ right ?
Or was it a mistake in human thinking that the God Family has to reveal and set right before Jesus returns and makes ‘all things new’ ?

So, ‘old’ or ‘new’ are not the best labels to pay attention to when shopping for what is simply right.

When Jesus returns the God Family will continue to restore humanity to
‘the-good-old-days’ of the original creation, when everything They created was ‘very good’, and very new.
But will SDA men have a mind and heart to allow the God Family to do this, to set all things right ?
Or, will they wrongly continue to raise themselves up – above women, even – in these ‘bad new days’ ?

Does the ‘last generation’ of SDA men have to be converted and overcome the ‘sin’ of misogyny before Jesus returns ?
Or is the ‘character’ of the current anti-WO ‘theology’ right, and ready to enter in through the ‘Pearly Gates’ ?

Does the ‘last generation’ of SDA men have to be converted and overcome the ‘sin’ of misogyny before Jesus returns ?
Or is the ‘character’ of the current anti-WO ‘theology’ right, and ready to enter in through the ‘Pearly Gates’ ?

Dennis, in my opinion, and moved by my professional experience with human behavior and treatment of deviancy, I am fully convinced that the issues of misogyny and discrimination in general, are not a religious matter or a spiritual issue.

George and DT –
According to a gospel writer Jesus is quoted as saying “Gentiles can be more
wiser than the Children of Light”.
Another way of saying – “People living in Babylon can be more wiser than
persons who believe they are living in the Kingdom of Heaven.”

it was noted that the General Conference is out of compliance with regard to Fundamental Belief Number 14 (especially with regard to differential treatment between male and female) and that this could be partially rectified if they would at least list the name of SECC’s President, Dr. Sandra Roberts, which for five years has been blank in the Adventist Yearbook.

What a ridiculous situation!!!

I suggest that the SECC Constituents vote that any money sent from the Conference to the guys upstairs should require the signature of the Conference President on the check as shown in the YB.

Since there is no name in the YB, there is no way to send money upstairs… I bet Ted Wilson would understand this language quite quickly…

Some thirteen new congregations and companies were welcomed during the last five years to the conference.

Ordinarily, new church plants should translate into an overall increase in membership.

Instead, there’s a net loss. Why?
Here’s a post from another thread: 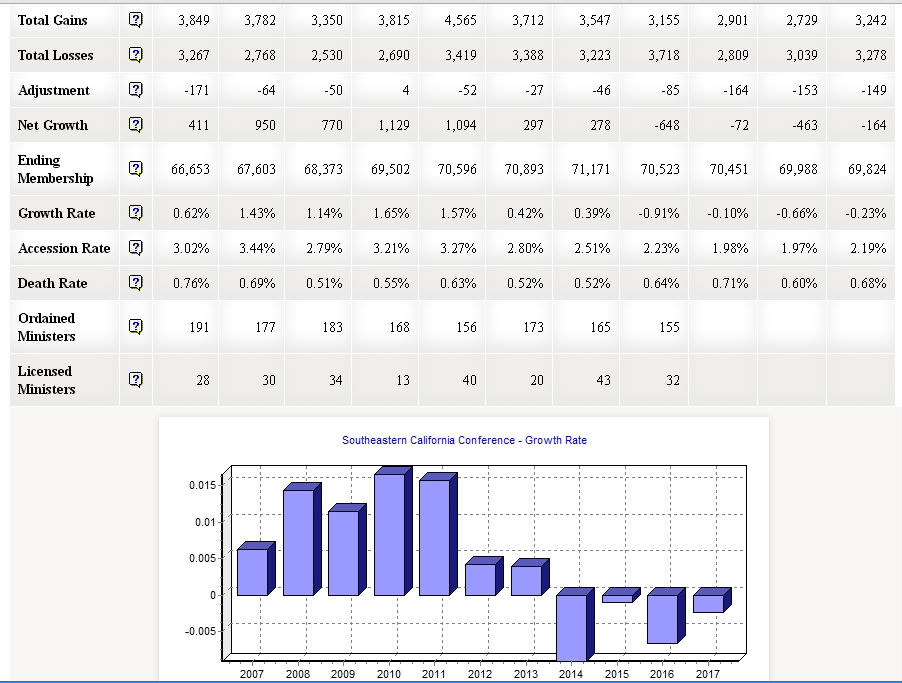 What’s the real story behind these thirteen new congregations and companies? Are they composed mostly of recent converts, of first generation immigrants or members joining from the surrounding churches?

What’s the real story behind these thirteen new congregations and companies? Are they composed mostly of recent converts, of first generation immigrants or members joining from the surrounding churches?

And your point as it relates to Dr. Roberts is?

Perhaps it’s one of those things our conference leadership might want address and possibly institute some corrective measures if needed. WDYT?

What’s the real story behind these thirteen new congregations and companies?

Are suspecting of any conspiracy???