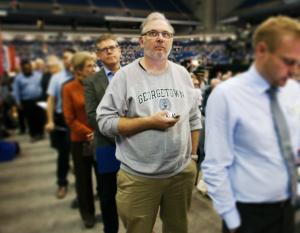 The editorial, bookended by a post-apocalyptic, dystopian depiction of the after-the-Adventists Alamodome (complete with Mötley Crüe soundtrack, seriously) and a confession of (tough) love for the Adventist Church, is the closest thing to castigation of the church I've ever seen printed in an official publication. Church papers celebrate, they don't critique. Maybe that's part of the reason Standish's article went viral on social media. He wrote something that many people were probably thinking, but few had the audacity to say out loud. It was almost as if the Adventist Corner of the Internet collectively said, "Wait, you can DO that???"

Standish framed his editorial as a "damn-the-torpedos," potentially career-risking article, and asked his audience for the space to say what he felt needed to be said. Melodrama aside, Standish offered several substantive critiques of the General Conference Session (the numbering 1-7 is mine, not his):

1. San Antonio produced winners and losers. "There are men and women who left elated. Their views confirmed. Their anointing recognised. Their faith rejuvenated. And I am very, very glad for them. I wish I was one. I’m not," he wrote.

2. Overinflated, un-audited membership numbers skew the influence of some territories at General Conference Session. "One of the incentives to inflate numbers is that the number of delegates does, in part, turn on membership count. But that isn’t the only problem in the way delegates are selected. Globally, we desperately need a far more transparent, democratic process for selecting delegates. We also need fewer ex officio delegates."

3. Over-reliance on ex officio delegates bars women from being equally represented because...ordination. "There is something troubling about a room of almost 2600 delegates debating the role of women in the Church, where only 17 per cent of the delegates are women. The result of the vote, by its nature, ensures that is the way it will likely continue as so many of the ex officio positions are reserved exclusively for the ordained. This produces a self-confirming circularity that is both unwise and unfair."

5. Adventism has drifted from its Radical Reformation roots. "We believe God speaks to all. But we voted to shut down the conscience of others. As a movement, we are drifting very dangerously into the hierarchicalism, formalism and dogmatism that our pioneers explicitly rejected."

6. For not being a credal church, we sure sound credal these days. "We have no creed but the Bible. But we spent an inordinate amount of time debating jots and tittles in Fundamental Beliefs.

7. The GC Session cost the Church an estimated $45M (Standish's estimate). For What? "Imagine if we had a far simpler Session, and every five years we spent $45 million on coordinated evangelism in one of the largest cities in the world. Alternatively, imagine us using the $45 million to feed in the range of 25,000 hungry children, every day, for five years. It’s our choice. And I have to wonder what Christ would have us do?"

However one may feel about Standish's points themselves, the fact that he felt at liberty to speak freely as the editor of an official denominational magazine is immensely important. If speech within Adventist publications is limited to praising the church, journalism becomes a big palm frond-waving extraveganza, carried out at the cost of chopping off all the branches where new growth might otherwise emerge. (I am keenly aware of the risk that runs the opposite direction: All critique and no appreciation rots the whole tree from the inside out. Balance is needed.)

If Jesus had been given the microphone at San Antonio, I wonder what He might have said? Would he have continued to elevate the role of women which He did so radically to counter the oppressive Jewish culture of His era? Would He have dared to speak His mind like James has so courageously done here?

My read of the Gospels was a Jesus who came to serve, who came to uplift both men and women, who came to restore. Who came to challenge the status quo. I think He too may have questioned the expenditure of $45 million for the illusion of democracy.

I applaud the sentiments expressed and am grateful that, at least in my Division, freedom of speech is alive and well.

the fact that he felt at liberty to speak freely as the editor of an official denominational magazine is immensely important.

Indeed. And James Standish is to be commended for his courage and honesty.

Point 2 above, is particularly significant. We know all areas of the world church have church rolls which include members who haven’t seen the inside of a church for years. But I’d venture to suggest that the rolls in the developed world are more realistic than those in the developing world.

We all hear stories from places like Africa and Papua New Guinea, about thousands of people being baptized in a single day. What we’re not told is that in many cases, large numbers have dropped out of the church within the first year or two, but without their names being removed.

And as James Standish has correctly pointed out, this leads to delegates from those divisions having disproportionate voting power at GC sessions.

I feel conflicted. On the one hand I am immensely pleased that Standish has gone out on a limb as he has. It may provoke the local unions into action. Or it may leave them feeling that they don’t need to do anything - that it is all being handled at division level.

Is this the same person who discoursed on Seventh Gay Adventists, while refusing to watch the film.

Although one cannot make a direct comparison, this reminds me of an alabaster box of ointment . . . .

Why was not this ointment sold for three hundred pence,[a years wages] and given to the poor? John 12:5.

Although one cannot make a direct comparison, this reminds me of an alabaster box of ointment . . . .

Spectrum has mostly negative critiques (often very harshly so) of he church, and says almost nothing positive. “A magazine that cannot tolerate people with more conservative concerns is problematic.” I don’t expect Spectrum to change its viewpoint, but the official magazines of the church are similar but opposite in their thinking (support for the church), so I don’t see a problem with them being mostly positive.

And besides, there is no lack of critics of the church!

As far as his points, 1. Duh 2. the NAD has plenty of dead wood on the books. 3. The government of the North during the civil war was 100% white, yet made the right decisions re slaves. And the vote was 58% to 42%, at great variance with the gender mixture. So probably the vote was OK. 4. That is what the vote was about. 5. An opinion (that is OK) 6. an opinion. 7. Ev. is good, but the church has to have a forum where representatives can speak. WO supporters had a captive audience to make their point. They had a forum. They lost. Could have gone the other way. And they were given a chance to get their way. I think it would have been harmful if such a forum are not available for the members to have their say. see 1.

Jared I agree with you! All seven of the points you listed were quotes that resonated with me. I applaud James Standish for his bravery and there will be an uproar if he is ‘punished’ for his honest opinion. It’s an opinion shared by thousands of others but we just don’t have the forum or the ear of the GC to speak up and be heard.

Membership numbers in the western world are just as bad. I can tell you that many people on the books at my church don’t attend anymore and haven’t for decades. I don’t think any region is worse than any other in this regard. (We don’t want to offend friends or family by removing names from the books.)

To me it seems James is sulking because he didn’t get WO, and is, like many others, blaming Africa for it. Face it, white Anglo/Europeans don’t run the church. The world church representatives voted and voted no.

I was at the GC. My impressions were rather positive.

Perhaps James’s education at a Jesuit university (Georgetown) has influenced him imperceptibly to him away from the high ideals of his father and uncle. Or perhaps he deliberately changed track. (This kind of judgmentalism is totally unacceptable. You really need to self-police or - however long you have ben around here - you will be tossed. - webEd)

“We have heard that the voice of the General Conference is the voice of God. Every time I have heard this, I have thought it was almost blasphemy” (Ellen White Manuscript 37, April 1, 1901). (Tip of the hat to friend Bronwyn Reid.)

The closer we get to the Acts 2 church model, the nearer we get to biblical Christianity and the truest, most dynamic definition of church.

The church as already strayed so far from the early church that should Paul arise and view what it has become, he would not even recognize it. It is more closely following the church that it labels Babylon, so that it appears that it is the pattern that has been copied. Who would have thought that while it took 1700 years for the one church to develop into such a hierarchy, the Adventist church has achieved in only 150!

I love your comment Pici.
In defense of, "money pours in, money runs out."
Brilliant!

How miserable a state are we in, if we need to particularly laud someone who for not pretending!

Yes, it is laudable - because it is showing a trend for revival and reformation.There is hope, if we dare to share what is really on our minds - including critique, rather than just “celebrate” pure propaganda.

should Paul arise and view what it has become

Paul would immediately write the Epistles to the SDAs (I, II, III and IV)…

this reminds me of an alabaster box of ointment

Just wondering whose feet were to be kissed and drenched in perfume in your analogy - and why. Perhaps you need to reread the story. Just a thought,

imagine us using the $45 million to feed in the range of 25,000 hungry children, every day, for five years. It’s our choice. And I have to wonder what Christ would have us do?"

“Come, you who have won my Father’s blessing! Take your inheritance—the kingdom reserved for you since the foundation of the world! For I was hungry and you gave me food…” Matt 25

PS: I completed this summer 230 miles of the John Muir Trail.

I did not take Journalism 101, but I think I discern what James Standish is saying: the GC vote regarding women’s ordination does not preclude unions in the exercise of their conscience from authorizing and implementing the ordination of women to the Gospel ministry. He is so correct.

Yes, but just wait and you will see how that vote will be distorted very soon. I have an “intuition” that a witch hunt is being meticulously planned, so when it happens, it should NOT be a surprise to anybody.
“Stay tuned”…

Is this the same person who discoursed on Seventh Gay Adventists, while refusing to watch the film.

While I admire James’ sentiments expressed here, you are right in mentioning that he still has room to grow.