On August 8, Melissa Osadchuck, a former employee of Weimar University, filed a lawsuit in the Superior Court of California, County of Placer, alleging sexual harassment by her supervisor, Dr. George Araya, described as the vice president of academic affairs at the time. The lawsuit also alleges that Weimar University “failed to take immediate and corrective action” when notified about the misconduct.

Sweep…sweep…sweep, opps. some still not under the rug!

It sounds like Araya has a come to Jesus moment coming up.

So much other stuff already there it probably can’t fit… 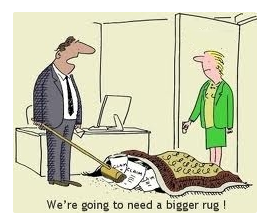 I’m surprise that Neil Nedley, the president of WU and a physician specializing in the treatment of depression failed to remember how important psychological borders are by allowing Dr. Arraya to remain in his position while in the midst of investigation. This is akin to leaving a child to remain at home where his parents are known to be abusing him.

This is really sad and it will reflect badly on the church. May justice be done!

“Paul Ratsara, former president of the Southern Africa-Indian Ocean Division of the Adventist Church, is chair of the Graduate Religion Department.”

This is indeed very interesting… I remember how much we discussed on Spectrum the many nuances of the scandal at that Division before Paul Ratsara finally resigned. Fascinating that he now holds such a high position. Good for him…

It is glaringly evident that the administrative hierarchy will need to be changed. Someone will have to own and take responsibility for this epic miscalculation.

They are usually very creative and come up with some “maneuvering” and everyone is happy forever.

I’m surprise that Neil Nedley, the president of WU and a physician specializing in the treatment of depression failed to remember how important psychological borders are by allowing Dr. Arraya to remain in his position while in the midst of investigation.

This institution, as I understand it, is on the same level as Trump University. I understand that Doug Batchler has a major connection with Weimar. That should be all you need to know.

Like so many other things, the word Adventist needs to be removed from the facility.

Sadly, it appears that once again, a woman who is the victim of sexual assault will be the one to necessarily alter her professional career path, while the man who is responsible, continues on in his position with impunity, as if nothing had happened.

I hope her law firm is a good one and can get her a good settlement/judgment.

Another sad example (I am not saying that everyone that holds to headship does this, but it a teaching that can unwittingly promote it) of the predominance of Headship theology taught there. I can bet that the offender has a record if dug into enough on his past professional career. I have seen this more than once in my time as a church member and employee.

If what the alleged victim says is true, then this is absolutely sickening. Given the great reputation of Dr. Neil Nedley and Weimar, this could be a major blow to their reputations. If the harassment claim proves to be true, then Dr. George Araya deserves some major action taken against him based on the actions he allegedly performed.
If the claim from Ms. Osadchuck is found to be false then she would need some major action taken against her. I wonder if there were any witnesses, any history leading up to this, any security cameras to validate, etc. The fact that action was not taken, supposedly, is certainly a black eye. Many losses will likely result in this episode including the greatness of Weimar Institute.

This is akin to leaving a child to remain at home where his parents are known to be abusing him.

Which leads me to question the clinical judgement of Nedley. Not only should he not be president, maybe he should not be a therapist either.

Neil Nedley is board certified in Internal Medicine. However he has chosen to extend his practice to include treatment of depression and has written books and given lectures about it. I do not know whether he completed a residency in psychiatry but his clinical decisions on psychological borders are woefully inadequate, even a first year resident in psychiatry would do better.

Your wife should be able to offer a professional opinion. Ask her…

Your wife should be able to offer a professional opinion. Ask her…

Oy yes, we have had a number of conversations over the years. We have both had our doubts about him, especially more recently as he has started peddling supplements: Signature Supplements.

IMO that suggests he is going down the same rabbit hole as Dr. Oz. I have a hard time trusting medical (including psychiatric/psychological) advice from anyone peddling such stuff. Don’t get me wrong, some supplements have some efficacy, but so many are little better than snake oil. Doctors need to stick with evidence based solutions.

Don’t understand the dig at Doug Batchelor. From all I have seen Pastor Batchelor is a wonderful Christian man and highly esteemed.