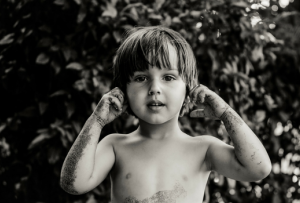 Jesus called a child to him. I am that child. Or was. That was many years ago and now I have a child of my own. I remember him that day, how he smiled at me, and touched me on the shoulder as I was playing. He drew me to him and put his arms around me. I looked down at his tanned hands, the fingers interlaced across my chest. When he spoke to the men around me I could feel the resonance of his voice rumbling through his face next to mine.

I knew these men. They were friends of my father and my father was one of them. I was glad that day because my father was at home, finally, and I hoped that he would stay for a few days this time, before he and the others and Jesus went off again.

I liked Jesus. He was kind to me and he listened to me. Sometimes he would carry me on his shoulders down by the lake and he would tell me stories as we skipped rocks. But sometimes, when we were sitting by the lake, he looked sad. I knew children weren’t supposed to ask grownups questions about themselves. “You don’t want to pry into other people’s business,” my mother always said, but it made me sad to see him that way.

The grownups are acting like children, we say, when they squabble and bicker over who gets to be first in line. In the midst of this revolutionary experiment of living up to a higher plane, the disciples want to know, in all seriousness, who will be first in the kingdom of heaven. But Jesus does not react with impatience or astonishment. Instead, he draws a child to him and, encircling him with his arms, speaks of turning in the opposite direction, away from the door which the adults have crafted and toward a child’s doorway, one that you would have to bend down to get through—that is, if you’d even noticed it.

Once again, Jesus reverses expectations with such abruptness that you can almost see the skid marks. “Become like children,” he says, in a society in which children, while loved, were to be seen and not heard. Decisions were made for children, not with them. Children gazed upward, puzzled, as the adults vigorously debated the consequences of their behaviors and the perils of nonconformity over their heads. No one, having been a child, would want to return to that state.

To turn around on this track (the word is metanoia, to repent) means to recapture the difference between childishness and childlikeness, the latter of which picks up the simplicity and trustfulness of childhood. We cannot, knowing what we know as adults, simply reverse the tape and re-record our lives. Nor is there any goodness in a pious helplessness that refuses action without a direct command from God.

We don’t chide children for being “childish.” It’s what we call people whose behavior doesn’t match their age. But to be “childlike” is to suggest a sense of trust, of wonder, of innocence. When spoken of an adult there is sometimes a tinge of pity, as if this naif was off picking flowers when he should have been reading up survival guides for the apocalypse. Sometimes you sense a bit of wistfulness for eyes that can see goodness in the world or in another person.

And then there is Paul:

When I was a child, I spoke like a child, I thought like a child, I reasoned like a child; when I became an adult, I put an end to childish ways…Brothers and sisters, do not be children in your thinking; rather be infants in evil, but in thinking be adults. — I Corinthians 13:11; 14:20

Except you become as a little child you shall not enter into the kingdom of heaven.

It’s a question of maturity and, as Reinhold Niebuhr suggests in Beyond Tragedy, “Childhood cannot see beyond its time and place. Maturity extends the range of its knowledge to larger areas of life and experience. Maturity is thus the fulfillment of the promise of creation. It represents a larger life than childhood.”

But maturity can also signal the atrophy of imagination and eagerness. Sincerity devolves into deviousness, ‘mere’ honesty into becoming brutally honest. Maturity that has lost its anticipation of the new relies on the sighs of cynicism to carry the weight of authority.

The consciousness of childhood gives way to the self-consciousness of the youth, and the egotism of the adult. Every adult experiences the reality of the Fall, over and over, in the course of life. Our rational freedom, a gift from God, opens possibilities to transcend our situation. But it’s also reason which often sabotages our ability to achieve such harmony. Niebuhr warns that, “Therefore man is estranged from himself and discovers that there is a law in his members which wars against the law that is in his mind (138).”

Becoming as a little child again is not a promise of a recaptured innocence. “To repent and be converted,” says Niebuhr, “cannot mean to achieve perfect honesty. It must mean to achieve the honesty of knowing that we are not honest (142).”

Paul sees spiritual maturity as the conscious evolution of the child in Christ. There’s no condescension toward being a child: the child speaks, thinks, and reasons as a child should. Rising to maturity, on the other hand, is not inevitable as one clocks the years. The very fact that Paul has to exhort the Corinthians suggests that becoming an adult involves a clear-eyed decision to take the long view over the short-term gratification of childishness.

“Be infants in evil,” says Paul, “but in thinking be adults.” Paul, of all people, is neither naive nor cynical. Don’t be experts in the latest ways to do others in. Don’t be sophisticated in your conspiracies against your enemies. Be innocent of evil and be grown up in how you think.

As I say, I remember Jesus from that day, the last time I would see him. He went up to Jerusalem. He was killed there, my father told us. Something else happened soon after. My father wouldn’t say much about it, but every time he talked about it he’d shake his head in wonder. A few years later someone read us a letter at our gathering that said, “Now we see in a mirror, dimly, but then we will see face to face. Now I know only in part; then I will know fully, even as I have been fully known.”

“And we are put on earth a little space, That we may learn to bear the beams of love.” — William Blake, Songs of Innocence

Barry Casey taught religion, philosophy, and communications for 28 years at Columbia Union College, now Washington Adventist University, and business communication at Stevenson University for 7 years. He continues as adjunct professor in ethics and philosophy at Trinity Washington University, D.C. More of the author's writing can be found on his blog, Dante’s Woods.

This past year as a new Grandfather I have learned more of Christ’s love, forgiveness, and blessings than ever before in my life. Vanessa has been the most understanding, wisest and practical “theologian” that I have ever met. It is important for me to communicate to my granddaughter that I love her and accept her even though I may not accept her misbehavior. The Holy Spirit knows the needs she has so I ask him to intercede according to His will. It is comforting to me that I can put my concerns in God’s hand, leaving them with Him. It shifts the burden to God, instead of carrying it myself. The love I have for Vanessa would like to control her life and keep her 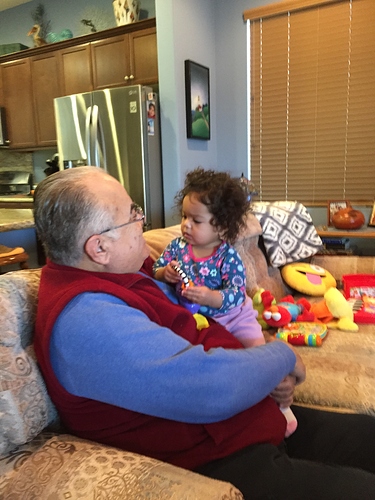 Thank you for this essay about “becoming like a child.” Some people use this as a reason to not tackle any difficult issue. You describe the tensions in reaching a goal of maturity, beyond drinking “milk.” Yet avoiding an advancement to a self serving way that allows “sighs of cynicism to carry the weight of authority.”

The consciousness of childhood gives way to the self-consciousness of the youth, and the egotism of the adult. Every adult experiences the reality of the Fall, over and over, in the course of life. Our rational freedom, a gift from God, opens possibilities to transcend our situation. But it’s also reason which often sabotages our ability to achieve such harmony. Niebuhr warns that, “Therefore man is estranged from himself and discovers that there is a law in his members which wars against the law that is in his mind (138).”

Becoming as a little child again is not a promise of a recaptured innocence. “To repent and be converted,” says Niebuhr, “cannot mean to achieve perfect honesty. It must mean to achieve the honesty of knowing that we are not honest

Metanoia. Repentance. Turn around. All good thoughts. The Buddhist way does not grapple with these big issues, rather advising to wake up and do right because it is right. That is also a “childlike” response.

Youth is the spring of life. There is newness,freshness, wonderment all around. The air is full of hope and promise. their eyes dance and their faces and hearts shine forth the joy of living. Within are great desires and strong urges crying for fulfillment.

The great surging of the heart are God implanted. what a cruel joke if they were placed without hope of fulfillment. Religion can either help or hinder those expectations. Ambition is of God. it is only the perversion of ambition that is devilish.

The fulfillment of freedom, greatness, and happiness lies in three primary choices.

Just like the rainbow they must come in proper order. The decision to accept Christ as Lord and Savior greatly focuses both ones life work and ones choice of a life companion.