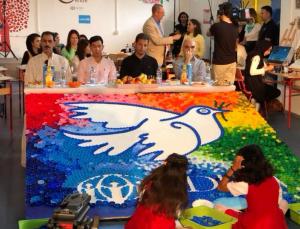 Trapped in housing where a family of six may share just one room, and then share cooking and washing facilities with other similar families, migrants in Serbia can suffer deep socio-psychological problems. Two years ago, ADRA Serbia was busy providing emergency aid to the tens of thousands who weekly passed through their country in hope of a new life further west. Now it is providing much needed aid for those living for longer periods within its borders; helping with social integration, education, life-skills and counseling.

Such is the success of the ADRA Serbia community center in Belgrade that it became the venue and focus for a special live-stream broadcast on World Refugee Sabbath, June 16, 2018.

Refugees crowded into the women’s resource room at the ADRA community center, keen to share with the world how ADRA had become their family. Sotude, a mother with two young daughters, shared how she was in despair before ADRA became a part of her life. Now she comes to the compound each day. She told how it lifts her spirits, allowing her to develop life-skills, engage in sports, talk to others back home via an internet café, and socialize in a safe environment.

ADRA also works with school-aged migrants, helping integrate them into the school system, providing mentors to help them with the language, and extra support at the center to help them catch up with the schooling they missed during difficult journeys from Afghanistan or Iraq.

Twelve-year-old Farhad is one example: a musician, keen football player, and a skilled artist, his time at the center has helped him develop his skills. An art exhibition sharing his paintings helped raise funds for a Serbian boy in need of a serious operation. ADRA’s “little Picasso” is already giving back to the community that is supporting him, which has not gone unnoticed. Last August, Farhad and his family were invited to the presidential palace to meet with the president of Serbia, Aleksandar Vučić, who graciously offered them citizenship.

“I would like to focus on the fact that among the refugees there are a lot of children," noted Corrado Cozzi, representing the Adventist Church in Central and Southwestern Europe. Interacting with the children at the center he emphasized that "a child needs special care, special food, and secure shelter every single day." Reflecting more broadly he noted how many children sadly live in dramatic conditions that will be a big impact on their future.

Throughout the one-hour program, and then in the spontaneous “afterglow” that followed, beneficiaries at the center expressed what a blessing it was for them to be helped in this way. The children’s choir even sang about ADRA being their family.

Igor Mitrović, ADRA Serbia director, summed it up in a toast at the end of his short devotional talk, inviting all to the table, not just in this world—as projects like this join communities together—but in the world to come.

Refugees around the world highlighted

A second live-streamed broadcast in the afternoon expanded the journey with stories of hope from across Europe, the Middle East, Africa, and Asia. It included video reports prepared by local churches, ADRA offices and individuals as well as panel discussions with ADRA leadership in Serbia, Europe, and worldwide.

Jonathan Duffy, president of ADRA International, noted that while there are 64 million refugees or displaced persons in the world, there are 20 million Adventists. “What if every Adventist just got to know two people,” he said. “What difference would that make?”

Reports from Belgium, Finland, France, Germany, the Netherlands, and Sweden, shared how members are interacting with their new neighbors. The church in Gothenberg, Sweden, turned their basement into a dormitory when it discovered young men sleeping rough on the street. In Belgium, with a continuing crisis, the church works with other volunteers to host migrants in private homes overnight, while in the Netherlands a local church is helping with education and befriending programs.

Other church members have been focusing on fundraising. Two young adults from Portugal plan to climb the highest mountain of every country in Europe with the goal of raising at least €54,000 for the Belgrade community center. Croatian youth shared how they gave up their New Year break to volunteer at a camp in Greece, while Stan Jensen from Canada movingly shared how his recent visit to Uganda was spurring him on to more action.

This is the third annual World Refugee day program sponsored by the Inter-European and Trans-European Divisions. This year, with positive input and support from ADRA International and ADRA Europe, as well as Adventist Review, the program has had an even greater impact.

Executive Director of ADRA Europe, João Martins, commented that “while Europe claims to be a continent where Human Rights are more promoted and defended, we are challenged to see inside our borders children, women, and men that fleeing from terrible war situations are not received and welcomed as they should be.” Martins continued, “ADRA works to fill this gap that is preventing thousands of persons to live with the dignity they deserve. This is why the World Refugee Sabbath is so important. When we have the chance to be in contact with this reality, we are challenged to do something to change it for better.”

“It would be fantastic if this were our last Refugee Sabbath, because by next year the crisis would be over,” concluded TED Communication director, Victor Hulbert, at the end of the broadcast. While sadly we know that will not be the case, initiatives like World Refugee Sabbath, highlighted and growing across Adventist Media, help raise the awareness in our minds of ‘who is our neighbor,’ and gives us practical motivation to give, pray, share, and befriend as we can in every area where we can have influence.

Watch the broadcasts and more on the TED YouTube Refugee playlist.

This article was written by Victor Hulbert and Corrado Cozzi, and originally appeared on the TED News Network, the official news service of the Trans-European Division of Seventh-day Adventists.

Image: Children complete a powerful peace mural in the foreground during the live programming. Photo courtesy of TED.

SPECTRUM is to be commended for excellent and timely coverage of the worldwide refugee crisis and events that provide greater understanding and make a positive contribution to our world. This article and others have given us a better context and example of what many groups in our church are doing to bring attention to the refugee/immigrant challenge we face globally. We need to learn what others around the world are doing and planning to confront this problem which affects all of us.